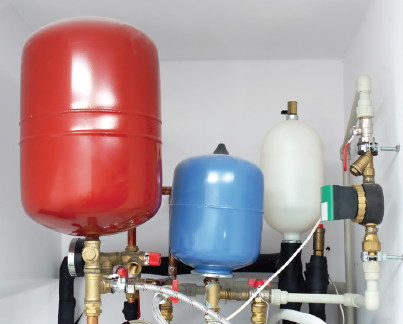 The expansion tank is part of a hot water heating system. It allows the water in the boiler to expand as it heats up without dramatically increasing the system pressure. Water, like many other materials, expands when it is heated. If there was no expansion tank in the system, the water pressure would increase dramatically when the boiler came on. This would cause stress on components, make the water more difficult to circulate and may lead to superheated water and steam explosions.

Shock Absorber: The expansion tank is an air cushion or shock absorber. The tank is partially filled with water from the boiler system. The other part of the tank is filled with trapped air. 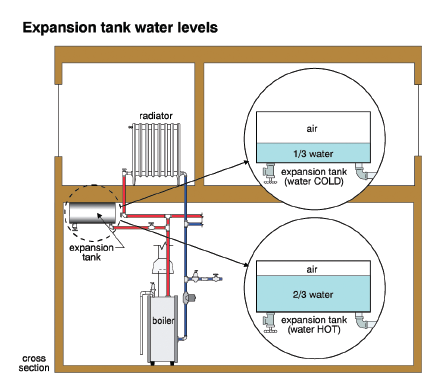 Open System Tanks: In old homes with open hot water systems, the expansion tanks were located on the top floor, often in a closet and sometimes in the attic. The bottom of the tank would be above the top of the highest radiator. These tanks could be cylindrical, rectangular or other shapes. They often had a sight glass so that you could see the level of water in the tank. 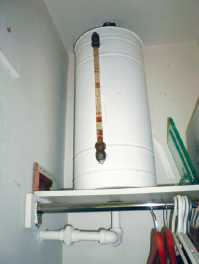 Overflow Pipe: There was an overflow pipe coming off the top of the tank, usually made of galvanized steel. This overflow pipe discharged outdoors or into the basement near the floor drain. There was sometimes a water makeup valve and pipe connected to the expansion tank so that water could be added from the supply plumbing pipes. The water from the heating system was connected to the bottom of the tank. 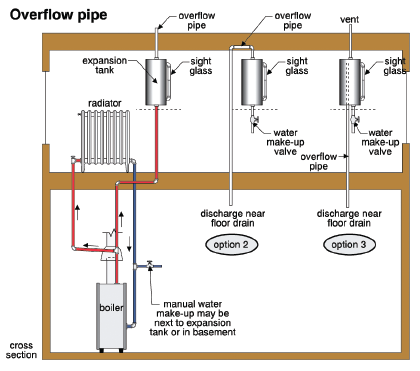 Closed System Tanks: On closed systems, there are two types of expansion tanks:

• diaphragm or bladder tank (used on all modern systems)

Differences in Tanks: The conventional tank is just a metal cylinder. The diaphragm tank has a loose rubber/neoprene bladder separating the tank into two compartments. One is the air side and the other is the water side, which is connected to the boiler through a pipe. The bladder prevents the air from being absorbed into the water over time.

Conventional Tank: On closed systems, it’s common to find the expansion tank strapped between ceiling joists above the boiler. If the ceiling is plastered, the tank may be barely visible. These tanks typically are horizontally installed cylinders, 8 to 10 inches in diameter and 18 inches to 3 feet long.

Pipe Connections: They typically have one pipe connected to the heating system, usually tapped into the hot water distribution supply pipe coming off the boiler. The expansion tank has a drain valve and may have an air inlet valve that can be opened to allow air into the tank as the water is drained out.

Isolating Valve: The piping between the heating system and the expansion tank has an isolating valve that can be manually closed to allow the tank to be drained. 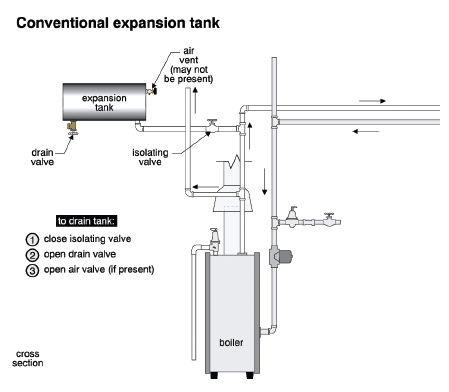 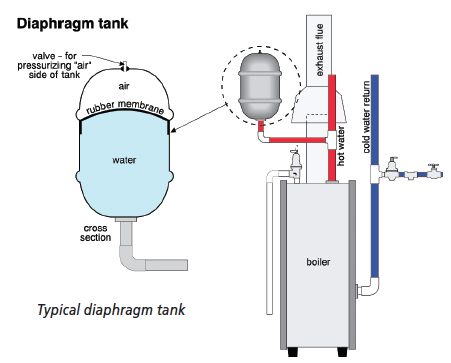 Normal Operation: As the boiler operates and the water heats up and expands, the air in the tank is compressed and the tank may be more than half filled with water.

Air Dissolved over Time: The air eventually is lost from the conventional expansion tank. It sometimes leaks out slowly through the air valve, but the majority is dissolved into the water over time.

Restoring the System: The homeowner or serviceperson will notice the relief valve discharging and eventually notice that the expansion tank is waterlogged. Restoring the air in the tank is done as follows:

1. The isolating valve between the boiler and expansion tank is closed.

3. The air inlet valve (usually located near the top of the tank) is also opened.

4. The water runs out of the drain line and air is introduced through the air inlet.

a. the hose is removed from the fitting,

b. the drain valve is closed,

c. the air inlet is closed, and

d. the isolating valve is opened.

6. Water from the heating system makes its way up into the bottom of the tank, compressing the air.

7. The system is ready for operation again.

Diaphragm Tanks Are Low-maintenance: Modern expansion tanks have a rubber (neoprene) bladder or diaphragm that separates the air and the water, as discussed. The system works exactly the same, but the flexible rubber diaphragm keeps the air from being dissolved into the water. These systems rarely become waterlogged and are therefore more convenient.

Where Is the Best Spot for the Expansion Tank? There is some controversy about where the expansion tank is best located. However, for the purposes of a home inspection, as long as it is present and connected to the heating system, we don’t have to worry. In most cases, you’ll see a bladder tank on the hot water supply distribution pipe coming off the top of the boiler. (Conventional tanks on closed systems have to be above the top of the boiler.) If the tank is connected to the return side of the boiler, the system will still work.

Expansion tanks are subject to the following problems:

• Too small in size

This concludes our general discussion about boiler system expansion tanks. For more details about the problems related to expansion tanks, please refer to the ASHI@Home Training Program.