Note: This article first appeared in the August 2017 issue of The Component Manufacturing Advertiser (http://www.componentadvertiser.com/). Reprinted with permission.

Since 2003, deck researchers and representatives of the code community have worked to improve and expand the deck provisions in the International Residential Code (IRC). I believe the deck-related provisions of the 2015 IRC, coupled with best practices in the American Wood Council DCA6-2012, provide practical information for constructing safe residential decks. As such, newer decks that have been permitted, properly constructed, and inspected should provide reliable service when maintained and inspected in-service annually. But what about the millions of older decks that were built without the benefit of improved codes and best practices?

Real Deck Safety Challenge
The deck safety challenge now is existing decks, which is an issue for homeowners and property managers alike. Until now, there has not been a practical and comprehensive resource that people could consult before making the decision to engage a professional who can evaluate decks that were improperly built, and that have been exposed to the weather or to saltwater spray.

The purpose of this article is to introduce a new book by Bruce A. Barker that is a treasure-trove of deck construction information and photos that show new and safe deck details, as well as unsafe details. Based on my experience in educational efforts, laymen need to see a visual depiction of what “unsafe” looks like, and then what “safe” looks like. One without the other apparently doesn’t work in learning—a stark contrast is needed. The photos in this book provide that contrast.

Mr. Barker participated in a Virginia Tech short course in 2015, and later that year he self-published a deck evaluation book. In 2017, he completed a Black+Decker book on Deck Codes and Standards, and I immediately purchased a copy on Amazon. I believe this book is ideal for creating the needed critical link between typical homeowners and multi-family property managers and safe-deck construction information given in the 2015 IRC and DCA6-2012.

Deck Codes and Standards has 127 (8.5”x11”) pages and uses high quality photos and illustrations to present code-recognized deck construction details and best deck construction practices. For people with existing decks, pages 100-103 provide a “Residential Deck Inspection Checklist.” Of obvious value to the homeowner and property manager, the author offers recommendations on various issues that may be observed. For some cases listed in the checklist section, his recommendation is stern: “Do not use deck. Strongly recommend professional evaluation.” Based on the current deck literature that I am aware of, none offer an actionable step based on the outcome from observing a certain deck deficiency or condition.

Making Deck Inspection Accessible
I am not aware of any single source that addresses the depth and breadth of deck safety issues as successfully as Bruce Barker’s 2017 B+D book. At my request, Mr. Barker created the following layman’s summary of his book for use in preparing this article. 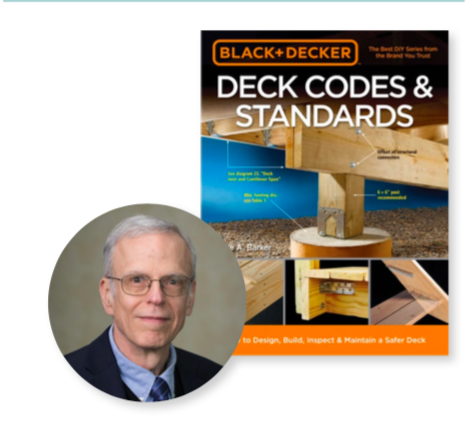 When homeowners think about their deck, they usually think in terms of how it looks from the top. If the part they see and walk on looks good, then in their minds the deck is in good shape. Few go under the deck to look at the important structural components, and few would know what they were looking at even if they did. Perhaps this is part of the reason why each year thousands of people suffer injuries, some of them life-altering, when improperly constructed decks fail. Most of these failures are preventable, however, there are few resources to help people prevent them.

Deck Codes and Standards is a new resource that helps people prevent deck failures by providing information about how to evaluate the condition and safety of a deck that has been in service for years. The book is intended for homeowners, but those in the construction, property management, and inspection industries will learn a lot by reading it. After all, the objective when building a deck, or anything else, is to build it so that it is safe not only when built, but throughout its entire service life.

Builders seldom go back to look at their work after they leave the job. This is unfortunate. Some of the best lessons can be learned by evaluating the long-term performance of decks. Deck Codes and Standards contains many pictures of deck defects. It then uses illustrations and explanations to demonstrate what should have been done. This format helps homeowners, builders, property managers, and inspectors identify and understand defects in existing decks, and helps them avoid making the same mistakes when building new decks.

Almost All Decks Are Defective
There is a great need for resources to help evaluate existing decks because almost all decks are defective. This may seem like an overstatement, but experience in the field indicates that it is not. In fact, this should be expected given that decks are often viewed as simple DIY projects, given the widespread lack of knowledge about deck construction minimum standards, and given that there is even less knowledge about deck construction best practices. This lack of knowledge is not surprising because until quite recently building codes had little prescriptive guidance about even minimum deck construction standards, and some of what little guidance existed was, and still is, often misunderstood.

Deck builders often fall into two groups. One group is the carpenter who wants to make a little extra money on the weekend. The other group is homeowners who believe that building a deck is an easy do-it-yourself project. It should not surprise anyone that these groups are seldom well-informed about deck construction best practices.

The first substantive prescriptive building code guidance about minimum deck construction standards was in the 2006 International Residential Code (IRC), and there was not much guidance. Subsequent IRC editions contained additional guidance, but some important details were still lacking. This lack of detail left government inspectors in the difficult position of trying to fill in the blanks through interpretation, and by local code amendments. A few jurisdictions, such as Fairfax County, VA, did an excellent job. Others, not so much. 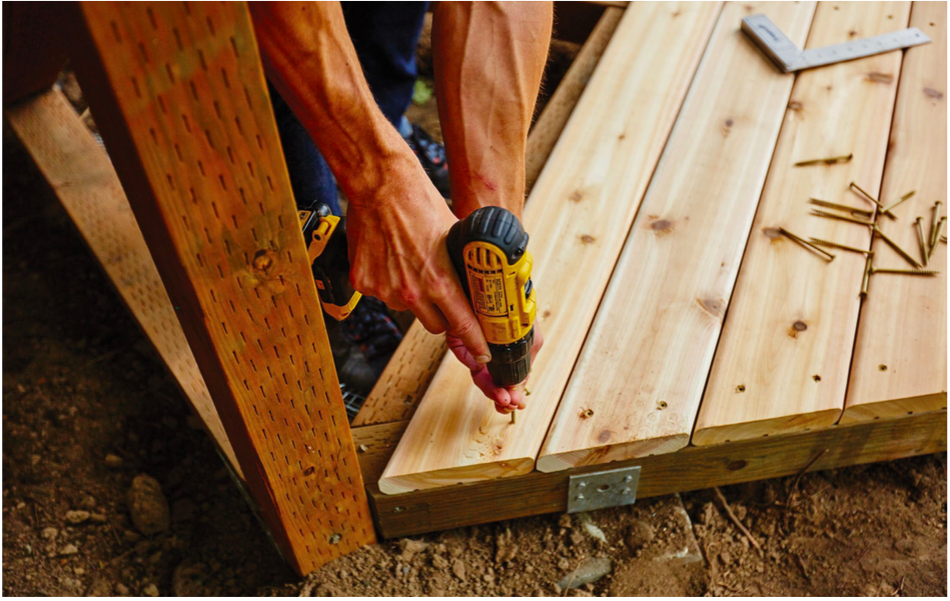 The IRC does not provide prescriptive guidance about how to connect guard posts to a deck. It relies on the performance requirement of resistance to a 200-pound load applied in any direction along the top. This leaves everyone to fill in the blanks about how to install this connection. Almost all deck builders rely on some combination of nails, screws, and bolts to connect the guard posts to the deck rim joist. This begs the question, what connects the rim joist to the deck? The answer is usually nails, which are often driven into the end grain of the deck joists. This deck post to rim joist connection is virtually guaranteed to fail, and it does not come close to complying with the IRC 200-pound load requirement. The only connection that has been tested and demonstrated to comply with the 200-pound load requirement involves installing a lateral load connector that is attached to one or more deck joists.

The IRC does not provide prescriptive guidance about how to connect stair stringers to a deck. This, again, leaves everyone to fill in the blanks. The result is a wide variety of connection methods that almost always rely on nails. Nails can work, if they are installed correctly, and if everything else about the stairs is installed correctly. The much better stringer connection uses manufactured connectors, such as the Simpson LSC.

Flashing
It does not matter how many bolts, screws, and lateral load connectors one installs into deteriorated wood. The connection is still likely to fail. Even a little bit of deterioration caused by water infiltration can significantly weaken wood. Flashing must be installed between the deck and the house when the deck uses the house for structural support. Flashing should be integrated into the house water-resistive barrier (e.g., house wrap) to form a drainage plane that diverts water away from the vulnerable deck to house connection.

Cantilevered Balconies
Cantilevered balconies are not decks, so Deck Codes and Standards does not address them. It does, however, contain an important warning for those who own, build, or inspect these structures. Cantilevered balconies are highly susceptible to water intrusion and wood failure, especially those that are concealed both above and below. Inspection openings should be provided for these concealed structures, and ventilation should also be provided to help wood that is subject to water intrusion dry.

Deck Construction Best Practices
Building codes are slow to change and to adopt new requirements. Local jurisdictions are usually at least one version behind the most current model code, and sometimes more than one version behind. For this and other reasons, deck builders, inspectors, and homeowners should rely on DCA 6 from the American Wood Council as the authority about deck construction best practices. A deck that complies with DCA 6 should pass inspection in any jurisdiction, and should remain safe throughout its entire service life. 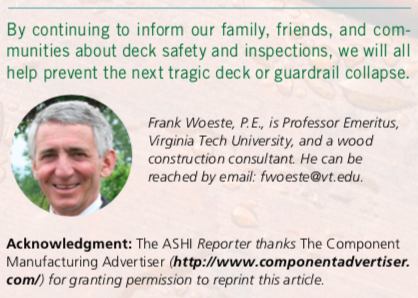