The Word's subject this month is electricity. The Word finds this subject interesting because the good inspector of electrical systems knows what is deficient, but the better inspector knows why it is deficient.

This month, we'll start by discussing some basic electrical theory. This may seem a bit dull and out of scope for what we do, but it sets the stage for understanding why some electrical deficiencies we identify every day are deficient. Inspectors who understand why something is deficient make better calls and can better explain those calls to their clients.

The ASHI Standards of Practice (SoP) requires that we report the voltage supplied to the property we inspect, and we (should) dutifully report this. But what are we reporting? Think of voltage like water pressure in a pipe. Voltage is the pressure of electricity available at an outlet such as a receptacle, a light or an electric water heater. Voltage is measured in volts. In almost all homes in North America, this pressure is 240 volts measured between the two ungrounded (hot) wires and 120 volts measured between one hot wire and the grounded (neutral) wire.

The term potential sometimes is used to describe voltage. An easy (if not technically accurate) way to understand this term is that electricity at an outlet is just sitting there waiting to start flowing and do some work. When you stick your voltmeter probes into a 120-volt receptacle, you're measuring the potential electrical pressure between the hot wire that (we hope) is connected to the small slot and the neutral that (we hope) is connected to the large slot. Tension is another term used to describe voltage; think high-tension wires.

Conversely, low electrical pressure isn't always safe; think a 12-volt car battery. Because car batteries can produce a lot of current, a shock from a car battery certainly can cook flesh and cause a lot of pain.

Like lightning, injuries caused by the extreme heat and the high-pressure wave produced by an arc flash and arc blast can be as injurious as any electrical shock. When dealing with residential and especially commercial power circuits, higher voltages demand higher respect and greater safety measures.

ASHI SoP also requires us to report the maximum current (service amperage) that the home's electrical system is designed to handle. Think of current like the amount or rate of flow of water in a pipe. Current is the amount of electricity that flows through a circuit or through a person. Current is measured in amperes (amps). A higher amperage means more electricity is flowing at the available pressure (voltage). The minimum service amperage rating for a new home is 100 amps, but often this is insufficient for a modern home.

When we report the service amperage rating, we are reporting the maximum amount of electricity that's safely available to run all of the electrical equipment (loads) in the home. Calculating the electrical load for a home (the service load) or for a subpanel (a feeder load) involves estimating loads such as general lights and receptacles, required receptacles such as the kitchen and laundry, fixed electrical equipment such as ranges and water heaters, and heating/cooling loads such as air conditioning condensers. A demand factor then is applied that reduces the calculated electrical load from the sum of the estimated loads. The demand factor accounts for the fact that all loads rarely are on simultaneously and even if they are on simultaneously, they won't be for long. This calculation is not particularly difficult, but it's way out of scope for a home inspection.

If you stuck ammeter probes into a receptacle, the ammeter would read zero. You shouldn't do this, however, because doing so would probably damage the ammeter. The reason the ammeter reads zero is because there's no current flowing at the receptacle until you place a load on the circuit. A light bulb is a load. To measure the current flow, you would use your clamp-on ammeter and clamp it around one of the wires; it doesn't matter which one. A clamp-on ammeter measures the magnetic field produced when current flows through the wire and displays a reading based on the strength of that magnetic field.

When a load (like a light bulb) is placed on a circuit, current flows at the available pressure (voltage) to perform work (make the bulb glow). The rate of work performed is power and is expressed in watts. A 100-watt bulb draws about .83 amps at 120 volts to make the bulb glow. We'll learn why this is true in a moment.

You may have seen the term volt-amps (VA), perhaps describing utility transmission wires. When you see volt-amps, think watts. One hundred kVA would be about 100,000 watts. Volt-amps is power in an alternating current circuit and accounts for factors such as the increased resistance to the flow of electricity caused by the alternating current electromagnetic field. The engineers will say that watts and volt-amps are not the same and they're right, but they're close enough for our purposes.

Laying down the laws

All of these characteristics of electricity are related. The relationships are expressed in the following equations, known as Ohm's Law and Watt's Law.

If you know any two of the above values, you can calculate the others as shown in Illustration 1, below. 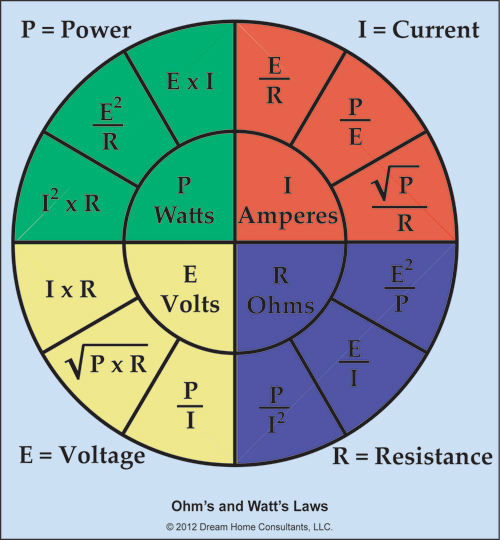 The most common application of these relationships, for our purposes, is found in the upper left quadrant, where we learn that when you multiply voltage by current, you get power. A 120-volt device drawing 20 amps uses 2,400 watts. If the device were designed to use 240 volts, it would draw only 10 amps to do the same work.

Why is the foregoing important? Wire size is based on current, not voltage, so one could run smaller (less expensive) wire to serve the 240-volt device and the manufacturer could possibly use less expensive parts to build the device. And, as we'll learn in a future column, heat in a circuit or device is based on current flow, so higher voltage devices should produce less heat. However, as we see in the lower right quadrant, resistance increases as you increase the voltage and increased resistance makes circuits run hotter.

Now that we have a foundation, we can build on it to understand issues like why over-fusing is bad, why low voltage (voltage drop) occurs and why it's bad and why loose connections are bad. Stay tuned.

Memo to Zeus: The Word does not reside on Mt. Olympus (just at its base) and welcomes other viewpoints. Send your lightning bolts or emails to Bruce@DreamHomeConsultants.com. The thoughts contained herein are those of The Word. They are not ASHI standards or policies.

Bruce Barker operates Dream Home Consultants. He has been building and inspecting homes since 1987. He is the author of "Everybody's Building Code" and currently serves as chair of the ASHI Standards Committee. To read more of Barker's articles, go to www.dreamhomeconsultants.com.