Many older houses throughout the country have an old style of plumbing trap called a drum trap, which is no longer allowed by model plumbing codes. I’ll explain why it’s no longer allowed and I’ll discuss what you should communicate to your clients when you find drum traps during home inspections.

Drum traps come in different shapes, sizes and configurations. The basic diagrams below show several examples of different types of drum traps that home inspectors may come across during inspections, as well as one type of setup that would not create a water seal trap. 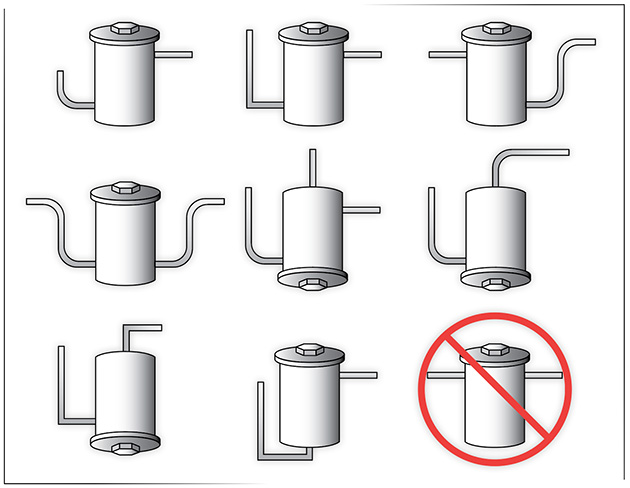 Plumbing traps prevent sewer gas from entering buildings. Drum traps do the same thing, but instead of just having a dip in the pipe to create a self-scouring P-trap, a drum trap consists of an enlarged “vessel” that holds a large volume of water. Drum traps were commonly used at bathtubs and occasionally at laundry sinks and kitchen sinks. Bathroom sinks are a possibility, too, but I’ve personally never seen one in a bathroom.

Why Drum Traps Used to Be So Popular

Drum traps were used to help prevent water from being siphoned out of a trap, especially when plumbing fixtures were not properly vented. 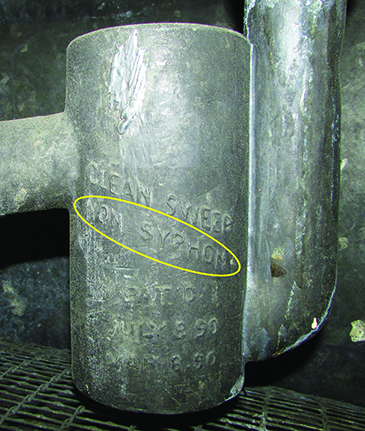 Side note: Drum traps were supposed to be easier to open up for cleaning and retrieving lost items, but it didn’t always work that way.

Why They're No Longer Allowed, For the Most Part

I inspect homes in Minnesota and one of the basic plumbing principles from the Minnesota State Plumbing Code (4715.0200, “S”) states: “Each fixture shall be provided with a separate, accessible, self-scouring, reliable trap placed as near to the fixture as possible.” If you take apart any properly installed P-trap, you'll probably find that it’s nice and clean inside; this is because it’s self-scouring. Water drains through the trap so fast that any solid materials are pulled out of the trap along with the water. 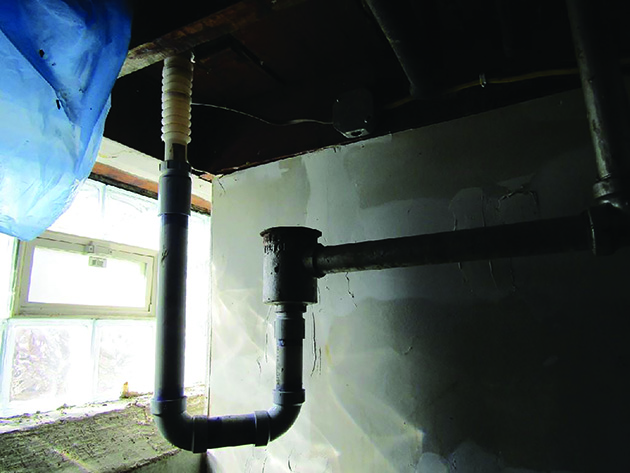 With a drum trap, on the other hand, you get no such cleaning action. A drum trap holds so much water that any solids entering the trap won’t be pulled directly through, which can allow for solids to accumulate in the bottom of the trap. This makes drum traps more prone to getting clogged.

Couple that with some goofy old designs (Photo 2) and you can end up with some very slow-draining traps. 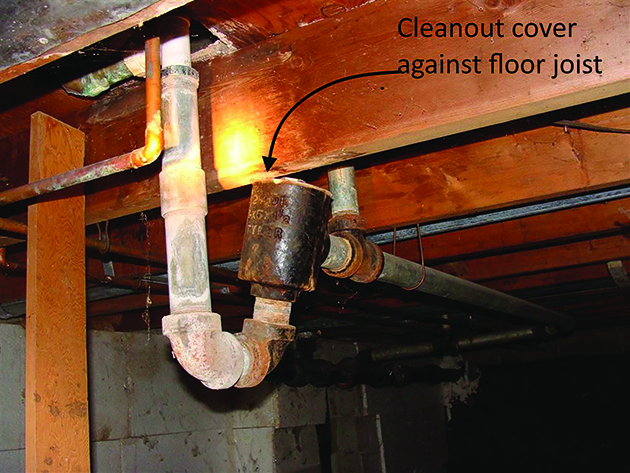 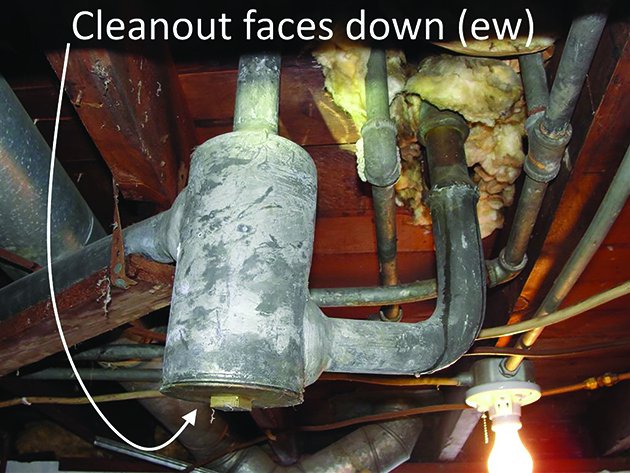 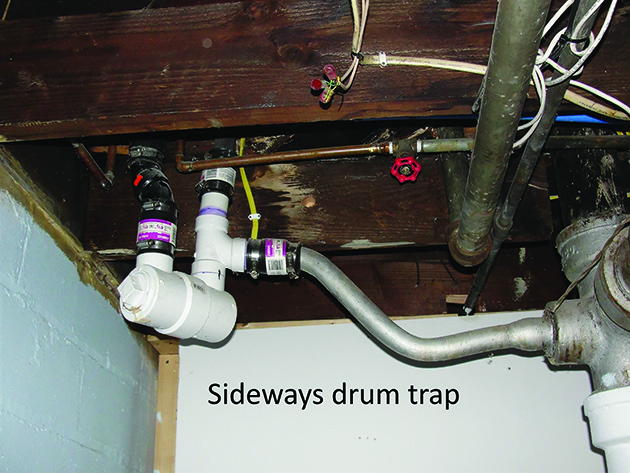 Even when the cover is accessible, it can be difficult or impossible to remove the cover because the threads are rusted shut. When drum traps are made from lead, they can be easily damaged because lead is such a soft metal. I’ve seen lead drum traps collapsed in on themselves from people cranking on them. This leads to makeshift repairs (Photo 6). 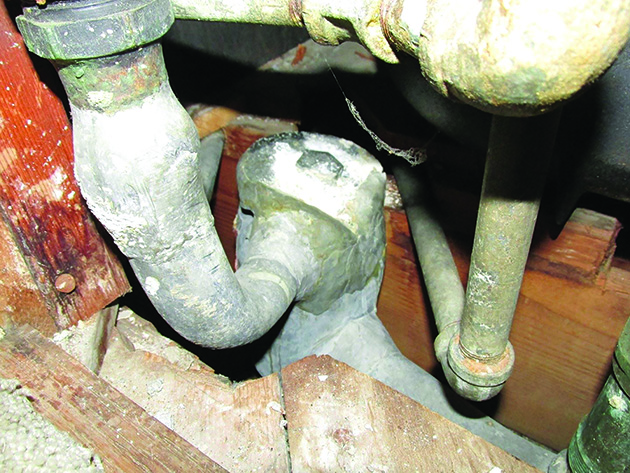 When the cover for a drum trap is accessible and easy to remove, it is important to make sure that it makes a tight seal. If it is not sealed properly, it has the potential to allow sewer gas into the home or leak.

Drum traps can also lead to foul odors in bathrooms. Because solids remain in drum traps, they can turn into stinky, miniature cesspools. I recently helped a friend get to the bottom of a stinky bathroom issue by finding a drum trap for the bathtub. When I filled the sink up with water and then drained it, water backed out of the bathtub and made an odor bad enough to make me choke. After thoroughly cleaning out the accumulated debris in the drum trap, the odor issue was fixed.

What To Do About Them

When you encounter a drum trap during a home inspection, there’s no need to make a big deal about it. Drum traps usually work fine, but they are more prone to getting clogged and can be difficult to service. Those are good pieces of advice to pass along to your client. Here’s the language my company puts in our reports when we come across drum traps: There was a drum trap in use at the fixture. Drum traps are not self-scouring, which makes them prone to getting clogged and they can be difficult to clean out. Be sure to keep hair and other debris from going down the drain at this fixture.

Some home inspectors even include a suggestion to consider upgrading to a modern type of trap for optimal performance, but my company does not. The way I see it, the cost would never justify the means.

We also include a link to a client-facing blog post that I wrote on this topic, which can be found on our website.

I suggest being extra vigilant about running a large volume of water through any drum traps that you encounter. You don’t want to miss a slow-draining drum trap because some plumbers aren’t as forgiving toward them as I am. And you know what they’re going to say: “Your home inspector should have told you…”

On a personal note, I had a drum trap at my old home in Minneapolis. It clogged shortly after I moved in, so I removed the cover and cleaned it out. I put the cover back on and never had a problem with it for the next seven years that I lived there. It was installed in such a way that replacing it would have required making a nasty hole in one of my floor joists, so I left it alone. Keeping a hair catcher over the drain was enough to keep it from ever getting clogged again.

The drum trap in Photo 7 leaked profusely when we filled the bathtub with water and then drained it. 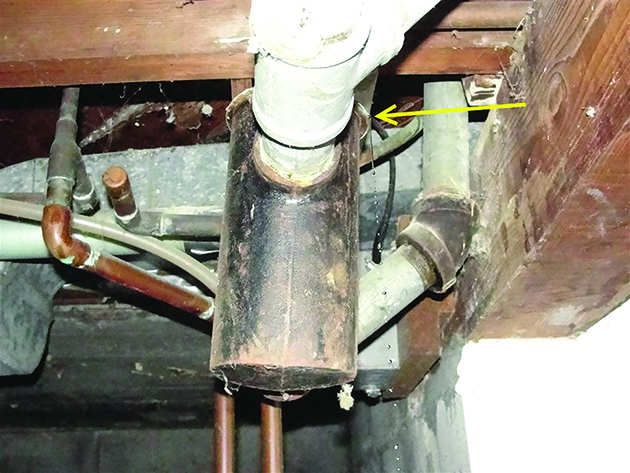 Photo 8 shows a leaking drum trap at a laundry sink. As with most of these photos, the drain is not vented. 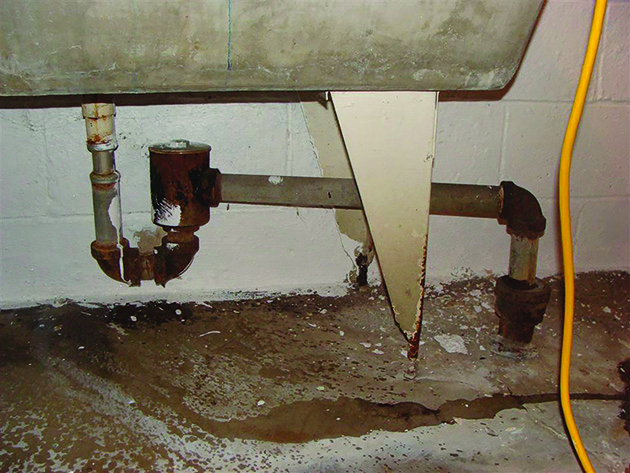 The drum trap at this next laundry sink had a severely corroded cap (Photo 9). 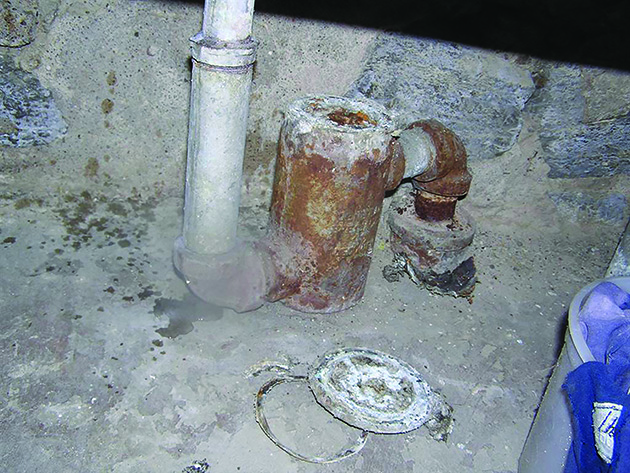 Photo 10 shows a lead trap with the cleanout facing down. This drain has clearly lost the battle with gravity; note where the notch in the floor joist is located. 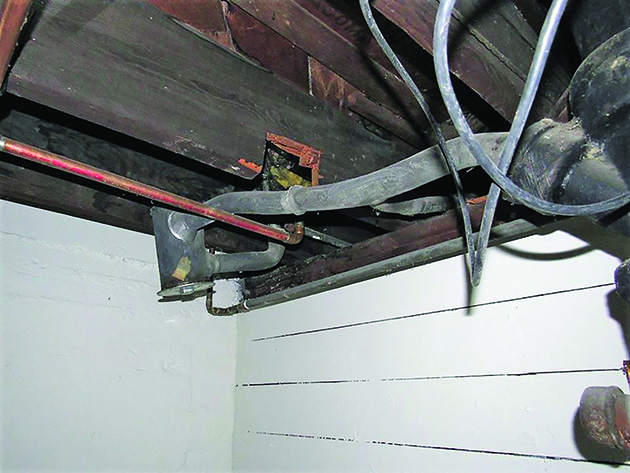 Photo 11 shows a nice mix of galvanized steel, cast iron, ABS and PVC drain lines, all leading to a drum trap on the left side. 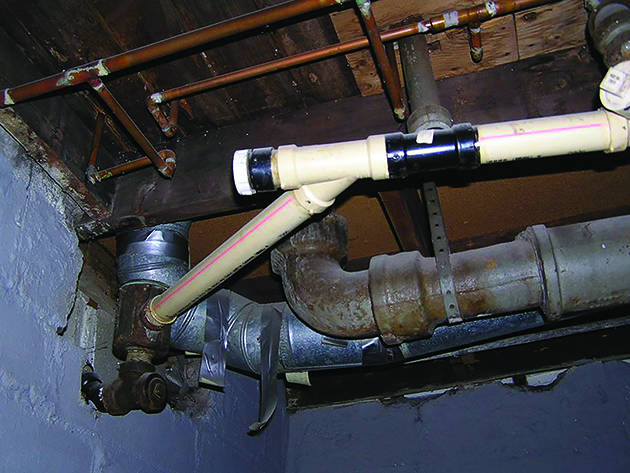 Photo 12 shows a radiator hose bent into the shape of a trap, which drains into a “drum trap” that is not really a trap at all because it is draining through the bottom directly to the sewer. 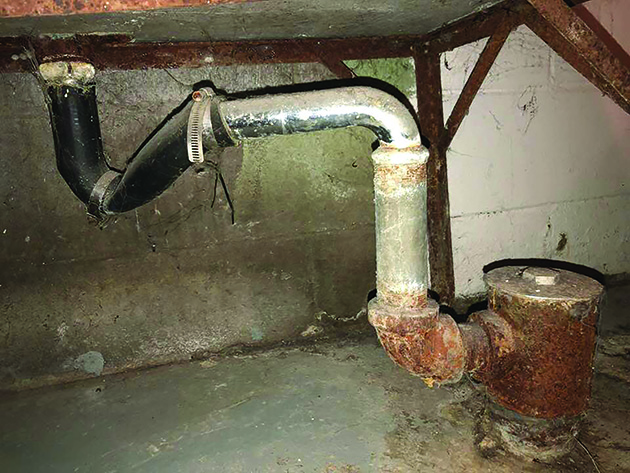 Photos 13, 14 and 15 show one of the few drum traps I have found at a kitchen-type sink. I say “kitchen-type” sink because this sink was actually in the butler’s pantry of a home built in 1900. 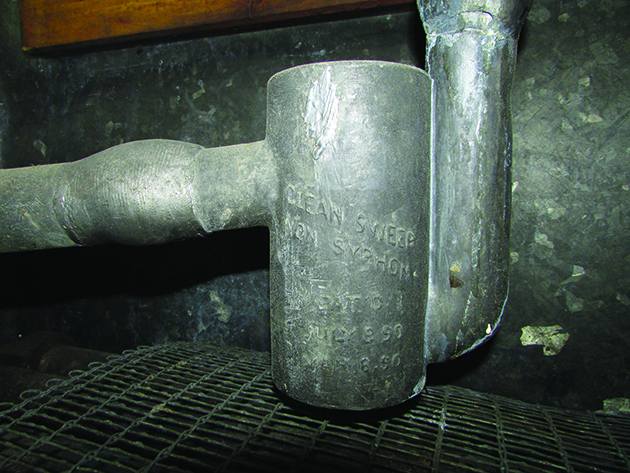 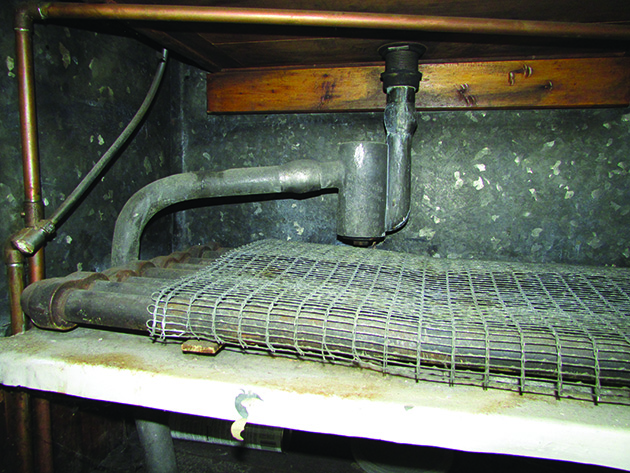 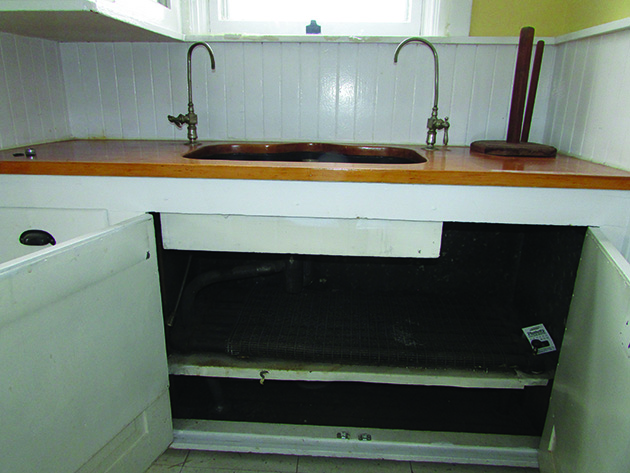 Finally, Photo 16 is one of my favorite photos of all time. This drum trap had probably rusted apart or someone had to cut the bottom off to clean it out, so fixed it with the bottom of a coffee can, glue, tape and string. Spray-painting the bottom red was also a nice touch. 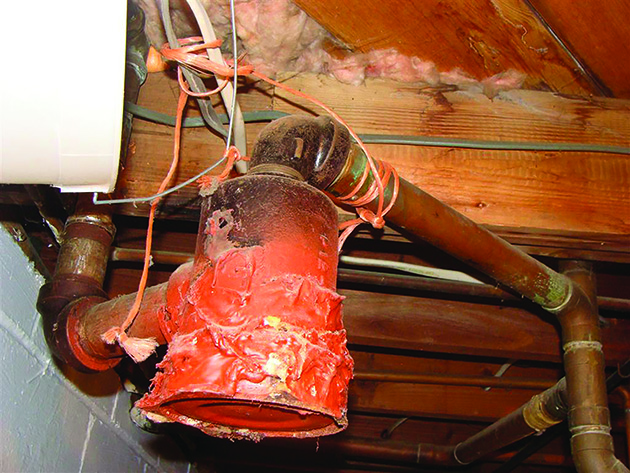