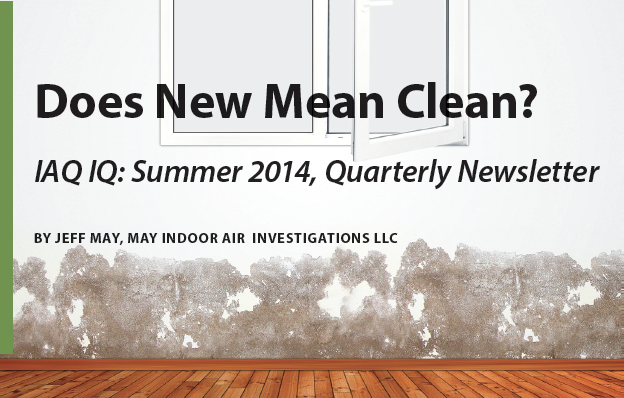 Buyers expect “new” to be synonymous with “clean,” but I’ve seen new homes and homes still under construction that had mold problems.

In one high-end construction project at a waterfront lot, the house had been under construction for over a year. It was a cool and hazy spring day when I visited the site, and it had rained the day before. The house was still not weather tight. Door openings and many window openings were plugged with plywood and plastic, and all the wood framing indoors was still exposed. Workers were sawing wood in the basement, and since the dierent levels of the house were still open to each other, biodegradable sawdust had spread to all levels.

The relative humidity (RH) inside the structure was 85%. Many types of mold, including the highly friable and allergenic Aspergillus mold, can grow when the RH is over 80%. In addition, the moisture content of the wood inside the house was over 20% – high enough for mold growth to occur. My tape samples from multiple surfaces contained minor mold growth that was not visible to the naked eye.

Surfaces had to be cleaned and sealed, and the house made weather-tight. The basement had to be dehumidied to prevent further mold growth, with the RH kept at no more than 50% in the unnished basement (and under 60% in finished basement spaces). The general contractor also needed to have some sort of dust collection or ventilation system in place and insist that workers saw wood only in those areas.

As I was leaving, the general contractor told me that in order to keep the highly qualied carpenters comfortable, he intended to operate the four A/C fan coils during the summer, when a great deal of dust would be generated at the site, even with a ventilation system in place for sawing. is would contaminate the system. It is important to isolate an HVAC system during construction by covering supplies and returns with impervious material. The system should never be operated during construction (or renovation), so supplemental sources of heating and cooling should be used. I told him to use window air conditioners in the summer, and portable or rented mobile heating equipment in the winter – again, to control the RH and help prevent mold growth.

Mechanical systems contaminated with mold growth can cause indoor air quality problems even before a new owner takes possession. In another multi-million dollar project, the prospective owners noted that the house seemed particularly dusty, even though the construction was nearly complete. One of the buyers experienced allergy symptoms whenever she was in the house for more than 20 minutes. The day before I visited the site, surfaces were vacuumed, but I could still see a ne layer of dust on counter tops, appliances and even floors.

The HVAC system had been operated throughout construction. The filters were the pleated media type that I recommend, but were sitting next to the air handlers rather than being installed within the filter slots. For some reason, the developer had removed all the lters – perhaps in an ill-advised effort to keep them clean. In so doing, he had paved the way for contamination of the entire HVAC system.

The coils and fibrous liners in all seven air handlers as well as all the ducts, were contaminated with construction dust. I recommended that the air handlers be dismantled and cleaned, all fibrous insulation replaced with closed-celled foam (such as Armaex), the metal ducts either be replaced or cleaned, and all exible ducts replaced. Rather than hire professional remediators, the developer used his own crew to do this work. When I re-examined the system, I still found construction dust inside the air handlers and the ducts. 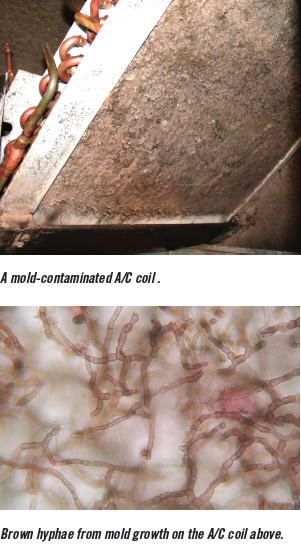 In addition, whoever had “cleaned” the air handlers must have used a conventional vacuum tool and had bent most of the fins on the coils – destroying them.

I told the buyers that given the wife’s allergies, the air handlers now all had to be replaced. The developer refused to undertake this work. The Purchase and Sale included a clause that allowed the prospective buyers to withdraw if the house was not ready by a certain date and the builder had gone past the deadline. Even though it was their custom house, the buyers were so outraged by the developer’s cavalier attitude toward their concerns that they used that clause to walk away from the deal. 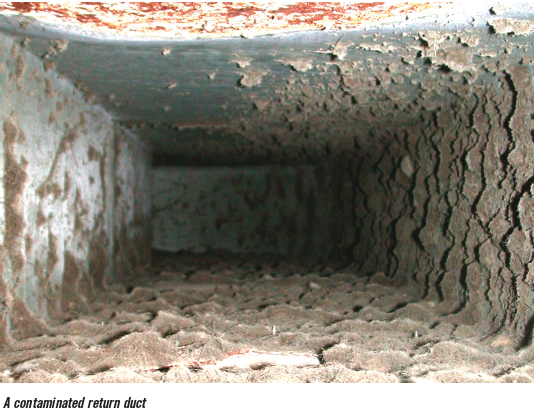 In another large construction project, a 9,000 square foot home backed up to a small hill. The gutter system had not yet been installed, and after several days of heavy rain, the basement ooded. Foundation walls, floor, the joists, and the subfloor all contained minor mold growth, so these surfaces had to be cleaned and sealed. The basement had to be dehumidified and workers had to saw wood either outdoors or within some space designed to contain the dust.

Ducts for the HVAC system had not yet been installed and were being stored in the basement. Some were already full of construction dust and mold growth. The ducts had to be wiped clean before being installed.

In a more modest property, the basement slab had been poured during hot, humid summer weather. The basement was not being dehumidied, so as the concrete cured, the RH in the basement rose, leading to mold growth on the sub-floor and joists. is growth was subsisting on sawdust, as well as on sugars and starches on surface cells of the wood. Samples confirmed the mold growth, which was widespread but not visible to the naked eye. Still, the prospective buyer knew it was there because every time he descended into the basement, his eyes watered and he sneezed. e joists, beams, sub-floor, foundation walls and foundation floor had to be HEPA-vacuumed and sealed, and the basement dehumidied in the humid season (generally mid-April to mid-October), with the RH kept at or below 50%.

What are some of the conditions that a home inspector should keep in mind in new construction?

1.  A basement slab that was poured during the summer in a basement that was not being dehumidified.

2.  An HVAC system that was operated during construction and that has inadequate filtration (one rated less than MERV-8).

4.  Foundation walls and oor that are covered with sawdust.

5.  In crawl spaces and basements, exposed fiberglass insulation that is sprinkled with sawdust.

See our book The Mold Survival Guide: For Your Home and for Your Health for detailed discussions on mold problems in basements, crawl spaces and mechanical systems. ©2014 Jerey C. May   www.mayindoorair.com

Jeff May is principal scientist at May Indoor Air Investigations LLC. He is the author of four books on indoor air quality and an adjunct faculty member at UMass Lowell. He is a retired ASHI member and will be presenting "Conducting Moisture and Odor Problems Investigations" at IW, Philadelphia 2015.

Jeffrey C. May, M.A., founder and principal of May Indoor Air Investigations LLC in Cambridge, MA, has been an ASHI Member since 1990. He served on the COR and is a frequent presenter at ASHI seminars. May is the author of three books: My Office is Killing Me! The Sick Building Survival Guide; My House is Killing Me! The Home Guide for Families with Allergies and Asthma; and The Mold Survival Guide: For Your Home and For Your Health, all published by The Johns Hopkins University Press. You can learn more at www.mayindoorair.com.