Fuse panels were installed through much of the 20th century, but with the introduction of circuit breaker panels in the 1960s, fuse panels had fallen out of favor by the 1970s. Many fuse panels remain in use and feature the glass-top Edison “screw-in” (plug) fuses for 120-volt branch circuits, cartridge fuses for 240-volt appliances and larger blade-type cartridge fuses in disconnects.

Fuses are less convenient than circuit breakers. When a fuse blows, it must be replaced. There is no resetting it to restore operation, as with circuit breakers. This can be a nuisance, especially when a spare fuse is not readily available. Fuses are reliable overcurrent protection devices. Properly sized, installed and maintained, fused systems need not be replaced simply because they are not circuit breakers. 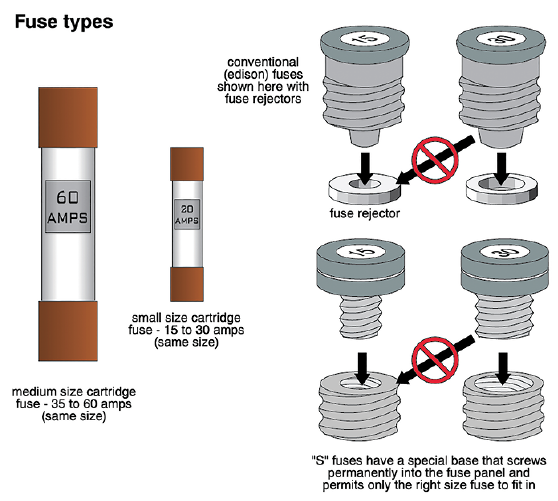 Remember, inspecting electrical components and systems is inherently dangerous and can lead to electrocution, shock or serious burns. Do not perform electrical inspections without training and taking appropriate protective measures.

A note on terminology: This discussion will use both technically correct and commonly used terms to describe components. If you use technical terminology in your reports, you should accompany it with explanations for your clients. For example, fuses and breakers are both overcurrent protection devices, but many homeowners would not understand the latter term. Conductors is the proper term, but most homeowners know them as wires.

The Updating Question
Fuse panels often are associated with older ungrounded wiring, a small number of receptacles and an absence of modern electrical devices, such as ground-fault circuit interrupters (GFCIs), arc-fault circuit interrupters (AFCIs) and tamper-resistant receptacles. A replacement panel with circuit breakers is a practical element of modernization of the electrical system, particularly if the service size (ampacity) is small. (Most jurisdictions will require a minimum of a 100-amp, 120- to 240-volt service on replacement installations.) 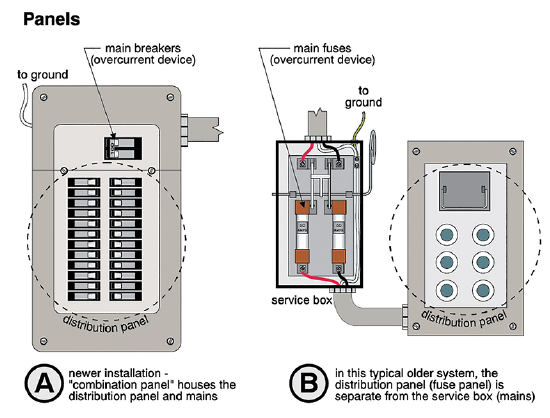 ADVERSE CONDITIONS TO WATCH FOR AND REPORT

OVERFUSING
Overfusing is the most common adverse condition in fused panels. As with circuit breakers, you determine this condition by removing the panel cover to compare the conductor (wire) size to the fuse rating. A 14-gauge copper wire with a 25-amp fuse is not adequately protected and is often said to be overfused.

Overfusing increases the potential for overheating in the circuit. Overfusing is often a homeowner error, easily corrected by replacing the 25-amp fuse with the appropriate 15-amp fuse. When you find any overfusing during an inspection, you should recommend immediate correction and make sure the client understands the safety implications. Most jurisdictions require that any work on panels with Edison-base fuses include installation of non-tamperable adapters and type-S fuses. 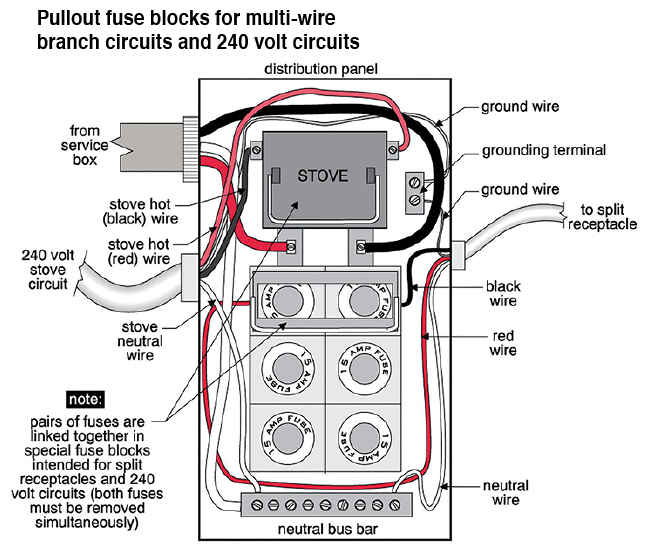 The wire size is sometimes legible on the cable sheathing or markings on the wire insulation. Where missing or illegible, compare the wire to known wire samples, either in the panel or in samples you carry with you. Visual identification of wire size is a useful skill to develop.

Special fuse types
It is useful to understand different fuse types. This is especially true in situations where seemingly right-sized fuses blow frequently. 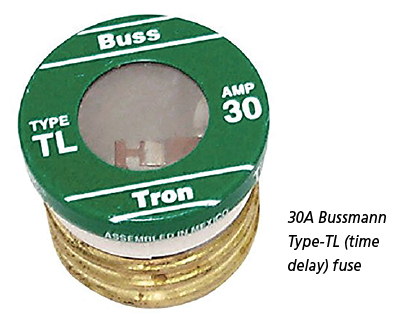 Mini-breakers—when a fuse is not a fuse
Mini-breakers look like fuses and screw into Edison-base receptacles, but they are actually circuit breakers. Rather than a glass top, they have a solid cap with a reset button in the center. The advantage is these can be reset when they trip and do not need to be replaced. Many jurisdictions do not permit these devices because incorrect amperage mini-breakers can be readily installed. Some panel covers will not close properly with mini-breakers installed. The button on the breaker may interfere with the cover as it is closed. 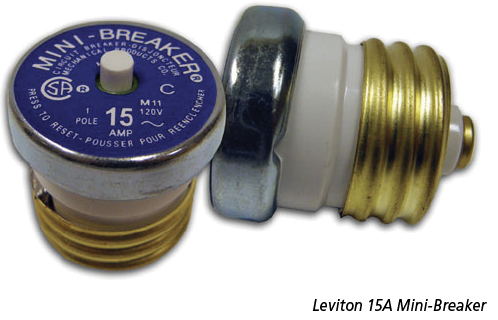 If the fuse rating is too large, the circuit is not adequately protected, increasing the potential for overheating and fire. If the fuse is too small, there is a risk of nuisance fuse blowing. If the fuse is correctly sized for the appliance, but the wire is too small, there is increased potential for overheating and excessive voltage drop, causing the appliance to run incorrectly.

The electrical inspection must not be limited to the panel. What you may not know and won’t likely discover during your inspection of the panel, is that a 10-gauge conductor may be spliced with a 14-gauge conductor somewhere along the circuit. The 14-gauge wire is not adequately protected by the 30-amp fuse. Electrical codes don’t allow this practice for obvious reasons, but it is done. Where possible in unfinished spaces, try to follow the entire length of the larger (240-volt) appliance cables to check for splices or connection points. This is not feasible if the wiring is in conduit.

Fuses bypassed
Fuses can be bypassed by putting a penny in a fuse holder or wrapping a fuse with foil. Electricity will flow through the fuse whether it has blown or not. The purpose of the fuse is defeated and you have a very dangerous situation. This condition is typically done by uninformed occupants. 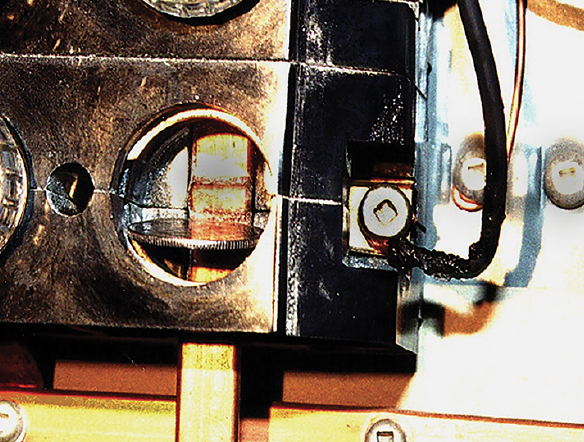 Sometimes, you can see foil around the edge of a fuse. In other cases, you may see the fuse projecting out of the fuse holder more than other fuses. This may mean that a penny has been put in the base of the fuse holder. It can also mean that there is a fuse rejecter washer installed. Be careful. If a fuse is blown but the circuit is working, you know the fuse has been bypassed. Look for signs of overheated insulation on conductors (wires) in the panel.  Blown fuses typically have an obscured window from the melted fuse material. 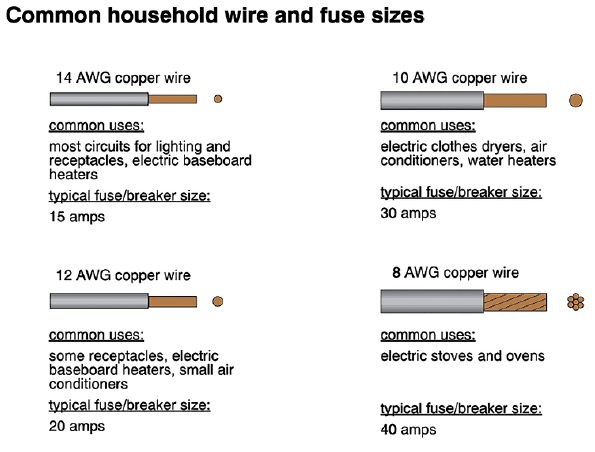 Fuses loose
Loose fuses are caused by one of the following:

Many electrical inspectors automatically tighten each fuse as they inspect the panel. It’s not up to home inspectors to do so; however, if you find loose fuses, report the condition and recommend correction. Home inspectors are not supposed to correct adverse conditions in houses, although you may be tempted to simply tighten the fuse rather than to write up a loose fuse as a defect. But as a reminder, don’t do any repairs. Simply report the condition and make a recommendation.

Fuse holders loose or broken
Sometimes, the supports for the fuses are worn or broken and will not stay securely in their position in the panel. In other cases, they won’t hold the fuses securely. This is particularly true of pullouts, often associated with 240-volt circuits.

This may be caused by one of the following:

In situations where fuse holders are loose or where there are pieces obviously broken, recommend corrections by a qualified electrical contractor. Fuse blocks with handles may be fragile and although they may look fine, they may crack or crumble if you pull them out. 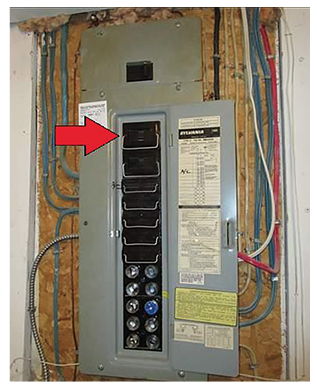 Fuses for multi-wire circuits not linked
A multi-wire circuit typically has a red and a black wire. This is typical of 240-volt circuits. It’s also true of 120-volt circuits going to split receptacles, for example. Because the circuit has two energized conductors, two fuses are needed to disconnect both conductors to work safely on the system. Removing one fuse and having the circuit not work can be very misleading. People may think the circuit is not energized and start to work on it. The other conductor will still be energized and can cause a shock.

The solution is to make sure that both conductors in the circuit have a common disconnect (one that pulls out two fuses at the same time). Multi-wire circuits should be on fuse pullouts if the two circuits end at the same location (for example, a duplex receptacle). Where this is not done, recommend corrections.

The condition is a result of poor installation. Look for red wires at the panel. Each one should be on a pullout fuse block. If in doubt, recommend that it be checked by a qualified electrician. 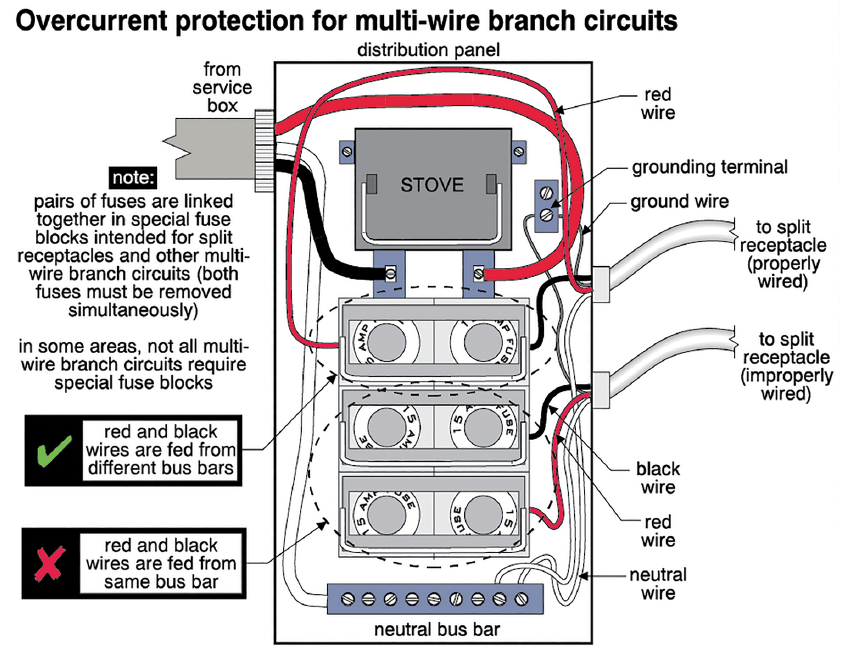 Fuse pullouts—to remove or not to remove?
240-volt circuits and 120-volt multi-wire branch circuits have two fuses. As discussed previously, both fuses have to be pulled to safely work on that circuit. It is often not possible to see the fuses, so you cannot tell whether the circuit is protected properly. (Sometimes, you can see the fuse through a small hole in the fuse holder.) Some home inspectors pull out the fuse blocks to look at the fuses. This is not recommended in occupied houses, since pulling the fuses disconnects the circuit and may inconvenience the occupants (for example, by changing timers).

As mentioned earlier, there is also potential of the fuse block cracking, breaking or crumbling when you pull it out. These blocks may not have been pulled for years and if you break it, you may be responsible for providing a new panel. Replacement parts for old fuse panels often are difficult to obtain.

SUMMARY
Fuses and fuse panels are slowly being eliminated; however, you should know how to inspect them.

Note of appreciation: Thanks to Roger Hankey of Hankey and Brown Inspection Services Inc. for his thoughtful and important contributions to this article.