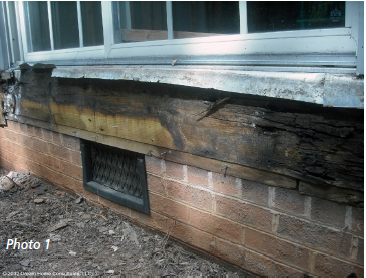 Our subject this month is decks. Readers with a long memory may recall The Word’s rants on this subject more than four years ago. There have been several changes to recommended deck construction practices since that time, a good enough reason to revisit the subject. Another reason is that after 65 columns (including the July issue’s column on the related topic of deck stairs), it is getting hard to think of completely new subjects to discuss. Please send new subject ideas to The Word.

Scary Stuff
Decks are not the most frequent source of claims against home inspectors. That dubious distinction belongs to structural problems inside the house. Does this tell you anything about a good place to focus your inspection? The good news about structural problems is that they usually can be repaired, given enough money. Structural problems rarely result in personal injury.

Deck structural failures, however, can result in personal injury and even death. Some of the injuries can be life-altering, and death is the ultimate life-altering event. No amount of money can fully compensate for a catastrophic injury or death. This is one reason why decks are scary.

Another reason why decks are scary is that decks, especially older decks, are often improperly built. There are several reasons for this. One reason is that decks are a popular do-it-yourself project; home inspectors know what that means. Another reason is that residential building codes have not had meaningful rules about deck construction until about the last 10 years. Even with these rules, misunderstandings about proper deck construction practices and inconsistent enforcement of minimum requirements have created a situation in which every deck you see has a high probability of having at least one significant defect.

Decks are, therefore, more than just the structure at the back of the house. A deck could be a front porch, a landing and stairs to a door, a balcony or any number of similar structures. Make sure you look for deck-like structures anywhere around the house. If it’s built like a deck, then you should probably inspect it like a deck. There is one caveat to the previous statement: If the deck carries more than its own dead load, then deck construction rules may not apply. An example of this is a screen porch that is built on a deck. The loads, including vertical and lateral loads, imposed by the roof and supporting components are not in the scope of the deck construction rules. Structures such as screen porches deserve additional attention and possibly further evaluation by an engineer.

Deck Demons
There are lots of demons lurking around decks just waiting for an opportunity to cause a deck failure. We could spend an entire inspection evaluating only the deck. We may have a standard of practice within the next year to do just that, for a separate fee, of course. For now, however, we have a limited amount of time to inspect a deck. We need to focus our efforts on identifying the scariest deck demons.

If you look at deck failures, some patterns emerge. It’s uncommon for components like posts, footings, floor joists and beams to be the primary cause of deck failures. These components can be secondary failure causes. They are important and should not be ignored, but there are other components that are scarier.

Stairs, guards and handrails are frequent primary causes of deck failures. Falls caused by improper construction and maintenance of these components can result in injuries ranging from minor to catastrophic. These components are scary and deserve careful inspection. The Word discussed these components in last month’s column (http:// www.ashireporter.org/HomeInspection/ Articles/Deck-Stairs/14890).

The big gun in the deck demon world is detachment of the deck ledger from the house. This big gun has two scary relatives that enable the evil work of this demon. Ledger detachment is one of the most likely causes of a deck collapse.

Lack of proper bracing enables the ledger detachment demon by allowing the deck to move. This movement stresses the ledger attachment connectors, which can, over time, cause fastener withdrawal, including detachment of the band board/rim joist itself. This bears repeating: Deck collapse can occur when the band board/rim joist and the deck ledger detach from the house as a unit. The Word will discuss bracing in a future column.

A False Demon
Deck failures, especially deck collapses, are sometimes blamed on too many people being on the deck. This might sound like a real demon, but it is, in almost all cases, a false demon. Studies have demonstrated that when people stand at a normal comfortable distance apart, it is nearly impossible that their combined weight will be more than the design live load of a deck (40 pounds per square foot). This does not mean that people’s actions are never the cause of deck failures. Lateral loads created by side-to-side motion, such as dancing in unison, can loosen important deck connections. Deck collapse caused by people overloading a deck is an exceptionally uncommon event. Deck collapses caused by people’s actions are far more likely to involve neglect of good construction and maintenance practices than they are to involve wild parties.

Flashing
Good deck flashing is very simple. Figure 1 shows how it should be done. Even if the L flashing is omitted, the flashing will usually work. 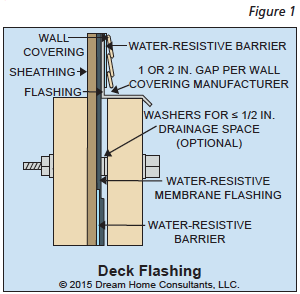 Installing washers to provide a drainage space between the ledger and the sheathing is controversial. The Word sides with the camp that believes that flashing is often imperfect and that providing a draining space gives water a place to go other than around imperfect flashing. The Word also appreciates the camp that believes in direct contact between the ledger and the sheathing.

Most decks have a door that provides access to the deck. Flashing around this door is often improperly installed. Figure 2 shows how it should be done. Even if the door flashing is improperly installed, the deck will probably not collapse for that reason alone. When combined with other improper flashing, improper door flashing can create a significant risk factor for a deck collapse. 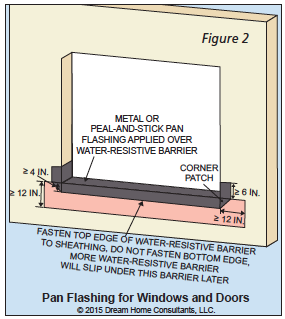 The problem encountered when trying to inspect deck and door flashing is that important components are usually concealed. Look again at Figures 1 - 2. Note how the components are lapped shingle fashion-to create a drainage plane. None of these flashing details are usually visible.

If the water damage is significant enough, and if there is access to the band joist/rim board area, the results of improper flashing can sometimes be detected. Even if access is possible, the results of improper flashing can take a long time to be detected. For this reason, it may be prudent to include a concealed flashing disclaimer in the deck inspection report.

Deck Ledger Attachment
Most decks rely on the attachment of a deck ledger to the house to provide support. Many, if not most, deck collapses occur when this support fails. Inspectors should understand how this attachment connection should be installed and they should carefully inspect this connection during a home inspection.

The second concept to understand is that proper deck ledger attachment is more complicated than just installing some bolts or screws. Factors such as the type of house floor joists, the type of house band joist or rim board, and the orientation of the house floor joists are a few of the factors that determine how the vertical and lateral load fasteners and connectors should be installed. Discussing all of these factors is beyond the scope of this article, but we will cover the basics.

Fastener spacing depends on factors such as deck floor joist length and spacing. Proper spacing distance can be found in DCA6-12 and in the International Residential Code (IRC). DCA6-12 is a free PDF download that may be found at www.awc.org. Every inspector who inspects decks should have this document. 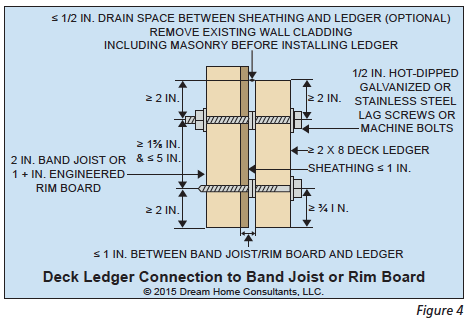 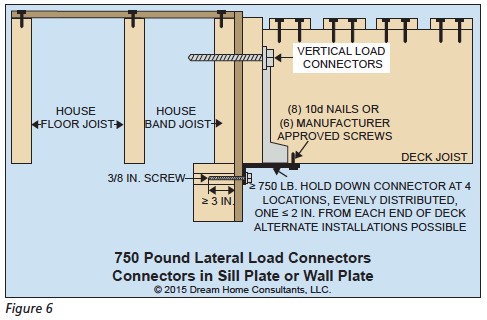 The Bottom Line
The Word wrote this column while traveling to and from the October 2015 Keystone ASHI seminar (a very well-run seminar presented by this ASHI chapter that is located in east-central Pennsylvania). A participant told The Word a story about how a client had fallen several feet after a deck guard failed. This inspector had, fortunately, reported a deficient guard and had recommended repair. As a result, this inspector heard about this unfortunate incident only when the client called to book another inspection.

There are several good lessons in this story, but the most important lesson for this column is this: Do not be the inspector who fails to report deck defects. The deck demons may haunt you if you do not find them and report them.

Memo to Hestia (goddess of the home and hearth): The Word does not reside on Mt. Olympus (just at its base) and welcomes other viewpoints. Send your lightning bolts or emails to Bruce@DreamHomeConsultants.com. The thoughts contained herein are those of The Word; they are not ASHI standards or policies.

Bruce Barker is the founder and president of Dream Home Consultants, and the author of Everybody’s Building Code, written to help home inspectors understand the International Residential Code. Bruce has been building and inspecting homes since 1987. He currently serves on the ASHI Board of Directors. He is a certified Residential Combination Inspector and a licensed contractor in Arizona, Florida and North Carolina. To read more of Bruce’s articles or if you need a presenter at your next chapter event, go to www.dreamhomeconsultants.com.