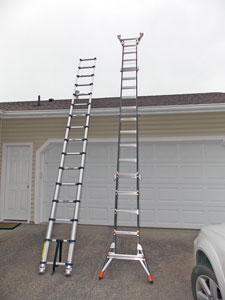 It has been two years since my last article about ladders in the January 2013 issue of ASHI Reporter (http://www.ashireporter.org/HomeInspection/Articles/Compact-Ladder-Test/2462), so it’s time for a long-term use update of the ladders I picked as the winners.

I had been using the Xtend and Climb 770P as my go-to ladder and had become dependent on it. With its climbing height of 12.5 ft., I could get to most single-story roofs and most interior attic accesses. It weighs 27 lbs., so it was easy to move around without banging into things.

In spring of 2014, Xtend and Climb sent me the 785P model. The 785P is a professional-grade ladder that goes to 15.5 ft. The first thing I noticed was the difference in weight, and then I saw how tall this ladder gets when extended. I can easily throw around the 770P when it is extended, but I definitely feel the weight of the 785P when it is at its full height. With the P designation, the ladder gets a 250-lb. rating, but this ladder does not flex as much as the ladders that have a lighter weight rating. Even with its heavier weight of 35 lbs., I still love this ladder.

Inspectors frequently ask me, “If I were to buy just one ladder, which one should I buy?” The reality is, it depends on the area you live in and the type of structures you inspect. If most of your business is residential homes, then I would pick the Xtend and Climb 785P. I use the 785P at 95% of my inspections, while my Little Giant stays in the car.

However, the 785P ladder is not perfect. It does have flaws and drawbacks. It goes up easily, but it can be a struggle to collapse it, especially if the weather is cold. The locks do not like the cold temperatures, so if the ladder has been in your vehicle overnight and the temperature is or has been freezing, good luck trying to get it down. Best to take it inside and let it warm up before using it. The locks tend to bind when the temperature is below 32 degrees and you might have to fight with them to unlock. The other major quirk is that the ladder will cock to one side and bind when taking it down; I frequently have to unlock alternate sections to get it down. The binding section will be impossible to unlock; however, sometimes you can unlock a section above it or below it to take some pressure off the locks. A similar issue occurs when you try to drop the sections when it is on an angle. The sections will bind, but you can get it to move by gently shaking the sections to relieve the pressure. I find that regular lubrication with Pledge helps, but doesn’t solve it 100%. Another issue is that the lower section does not always lock when you are extending it. The newer ladders have green “locked” indicators and I always step back to verify that the sections are locked. My last complaint is that the Velcro strap is good for about six months before it wears out from daily use; I added a metal snap to mine to solve that issue. Clients love this ladder and I get lots of positive remarks about the Xtend and Climb. Based on how frequently I use this ladder, I won’t be returning it any time soon. It does everything I need it to do and I can work around the annoyances so smoothly that most of my customers do not realize the ladder did not come down as easily as it should.

Little Giant sent me a Conquest 17 for the original test, and I gave very positive comments about the ladder. The only downside was that the actual climbing height was about 15 ft., or a single story. The Conquest is identical to the Dark Horse model, with the exception that the Dark Horse has wide flares on both ends. The Conquest has straight beams on one end. Because Little Giant did not have a Conquest 22 available in early 2014, they sent me the Dark Horse 22 instead. (As of fall 2014, Little Giant started offering a 22-ft. model of the Conquest.) This is a professional-grade ladder that is constructed with a fiberglass composite material. It is only slightly heavier than the aluminum Classic 22, but when it is extended to its full length, there is a big difference in how stiff and secure the ladder feels. The locking system is bulletproof, so once you get familiar with it, you can extend and collapse the ladder in seconds. The drawback with this ladder is the tricky maneuver required to raise it to its full length. You either need to extend it all the way on the ground and raise it to the gutter line or put the ladder in the vertical position and extend the telescoping section while balancing it. Either way takes practice to do smoothly and safely.

The Conquest or Dark Horse model adds an element of safety by having a nonconductive construction. I hope most of us always scan above for overhead wires, but if you have inadvertent contact with wires, the fiberglass composite is not conductive. Both of these models come with lifetime warranties and the quality of the construction shows it. Another benefit is the wheels that come with it; it is nice to not always have to carry a ladder when you have to go a distance. Now that Little Giant offers a 22-ft. version, I highly recommend this model for those who need a compact ladder that can reach a second-story level. However, if you have a regular need to access second-story roofs, then you should buy an extension ladder.

In my opinion, both the Xtend and Climb and the Little Giant represent the best of the ladders available to inspectors. These ladders may be more expensive than their competitors, but personally, I don't have a problem spending extra money on tools that I will use every day.

Climbing into attics and onto roofs are among the more dangerous things we do as inspectors. Recently, I asked a number of inspectors to share their “near misses” with me. I received more than 30 responses and there was a familiar pattern.

Managing slick surfaces. Most incidents occurred when the inspector was transitioning on or off the ladder. This transition causes the loads on the base of the ladder to change or be altered. Placing ladders on deck surfaces that are slick and having the ladder slide out of position was mentioned numerous times. A number of inspectors use blocks or wedge something behind the ladder to prevent this kind of sliding. I often use a doormat and place it under the ladder feet. When no mats are available, I use a towel as a substitute because providing a greater surface area will allow more traction. Trex-type decks that are wet, have snow, or algae on them are notoriously slick, and as a result, I always choose another location to place my ladder.

Not securing the top of the ladder. We have all done roof inspections on windy days, and several inspectors have had their ladders blow over. In many cases, there is no one able to set it back in place, so the inspector resorts to hanging by the gutter and dropping to the ground. Tying off the ladder or inspecting from the ground on windy days may be better options.

Using an owner’s ladder or homemade ladder. Your ladder is sitting outside and the owner already has a ladder sitting under the attic access. Do you take the time to get yours or just jump on theirs? This is a judgment call; several inspectors mentioned issues that came up when using a homeowner’s ladder, including one inspector whose landing was cushioned by a brand-new BMW. Occasionally, the only option is to use the built-in ladder, which is usually made of 2x4s. Once again, this is a judgment call on your part. Just because it hasn’t failed yet doesn’t mean it won’t fail when you get on it.

Stepping on a rung above the gutter line. There was a video on YouTube attacking a compact ladder company because of play in the hinges. The video attempted to show the ladder kicking out when the user stepped on the rung. What was actually happening was the user was changing the loading on the ladder by stepping on a rung above the gutter, which caused the loads to shift outward at the base of the ladder instead of toward the home. Always step on a rung below the gutter line, even if it’s a stretch.

The potential for a ladder accident is with us at every inspection. All it takes is a moment of carelessness. Several inspectors who shared their stories told of being laid up for five months or more after an accident. Some don’t get on ladders at all now and use alternate methods for roof inspection. Every time I use my ladders, I survey for the best location. Then, after I set up the ladder, I take a step back to ensure that the ladder is straight and locked in. This is a step that we all should practice every time we use ladders.