Foundation walls can fail. The role of a home inspector is to identify cracks, movement or both, and then to determine whether additional evaluation is required. In some cases, the cracks are clearly trivial—shrinkage cracks, for example. In other cases, the cracks may represent significant risk to the structure. 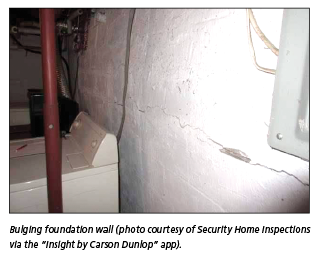 Foundation walls are really floors set on their side. You can think of a foundation wall as a floor with respect to the way it holds up the soil outside. (You may have to tilt your head sideways to envision this, but that’s exactly what it is.) The foundation wall needs to be supported—at the bottom by the footing and the basement floor, and at the top by the connection to the floor and wall systems. This is the same support as needed by a floor, which must be supported at both ends.

Although good practice dictates that the foundation wall should be keyed into the footing, often this is not done and in some cases, the support is not strong enough to stop a foundation from getting pushed inward across the top of a footing. In most cases, the basement floor will stop this (Diagram 1). 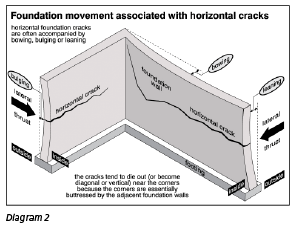 • If the foundation wall cracks horizontally near the middle, it may kick in near the midpoint of its height; this is the most common failure mode.

• If lateral support is lost at the top, the top of the wall may kick in. 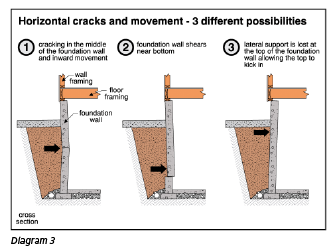 If the forces are applied slowly and over a long period of time, the materials that we normally think of as being brittle will flow and bend. Masonry and concrete walls can deform. These bows or bulges in walls, even if they do not have cracks, indicate movement and often require resupporting.

Walls that are subjected to horizontal forces often develop horizontal cracks. However, since these walls are restrained at the corners by the perpendicular foundation walls, the cracks may “die out” at the corners. In many cases, the cracks will be diagonal, extending up toward the corner near either end of the wall. Vertical cracks also may appear near the middle of the length of the wall. 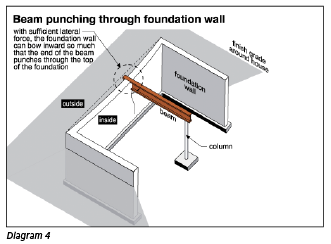 The wall may be bowing with no indication from the outside along the top. If the top of the wall is restrained adequately (that is, supported laterally), the foundation wall may not bow at the top and there may be no bowing along the length of the wall. The bowing or bending of the wall may occur between the top and bottom, with the maximum movement about halfway up the wall. The bowing may disappear toward the end of the walls because of the buttressing effect of the foundations at the corners.

Walls may lean in at the top as joists rot at their ends. If the
connection between the top of the foundation wall and the flooring system becomes weak, the lateral support is lost.

A common building mistake is designing the foundation walls to be supported laterally, but incorporating a short, wood-frame cripple wall or knee wall. This is common in multilevel homes that have sunken rooms and in houses with stepped footings on sloped lots. The short wood-frame wall on top of the foundation creates a weak joint, making the foundation wall laterally unsupported. These walls are more prone to failure under horizontal loads (Diagram 5). 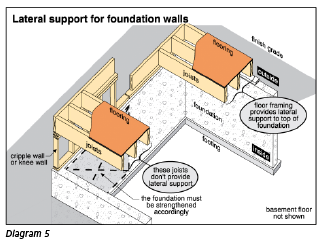 Failure may be sudden. Walls may move quickly if a heavy rain saturates the soil, creating substantial pressure against the wall. This may happen with heavy rain, but it also can occur if a downspout becomes disconnected or if gutters are clogged.

If the walls are short, soil pressure may cause a vertical crack and the walls will kick in at the midpoint. The horizontal forces are abundantly clear, because the direction of movement is into the basement, despite the fact that the cracks are vertical (Diagram 6). 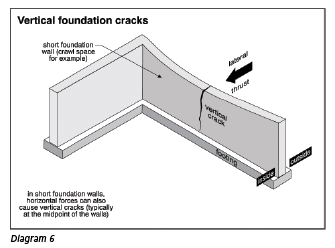 Verifying Inward Movement: Tips for Inspections
If the movement is significant, you’ll be able to see it with the naked eye. Typically, cracks are wider on the inside face. It may be helpful to use a flashlight to look into the crack.

To verify the direction and the amount of movement, it is often helpful to use a four-foot level (mason’s level) or a plumb bob.

Be sure to look along all house walls, both above and below grade, for leaning, bowing or bulging. 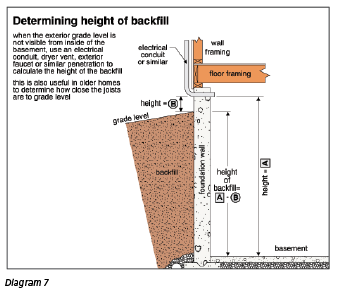 Vehicles, especially trucks, are heavy. Heavy vehicles on a driveway can cause problems for the home’s foundation. In situations for which the only evidence of horizontal cracking is along one side of a house, the cracking often occurs on the driveway side. You can point out the possible causes to the client, but you should not be definitive and you should not be conclusive about whether the problem is progressive or not, on the basis of what you see during one visit.

Vehicles also can strike and damage the above-grade part of the foundation. Watch for this along driveways, parking areas and inside garages. Having landscaping work done (including adding a swimming pool) with heavy equipment also can cause impact damage in areas away from normal vehicle traffic.

Impact damage often looks like a failure of a foundation wall due to lateral soil pressure, but usually it is more localized. In some cases, there is evidence on the outside of the impact via scraping or crushing of the exterior foundation face. If there is horizontal displacement such as leaning or bowing, then the point of maximum deflection usually will be at the above-grade level.

If all of the foundation walls are similar and exposed to similar forces, you should question why there would be localized failure
at one point. If it is a spot at which a vehicle can access the foundation, consider the vehicle as a possible cause (Diagram 8 on Page 16).

Expansive Soils and Trees
When wet, expansive soils exert tremendous lateral forces on foundations. If the soil can be kept dry, the pressure is reduced greatly. Attention should be paid to controlling surface and roof water runoff in areas where there are expansive soils. 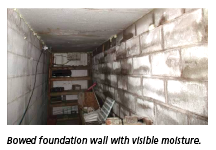 Tree roots can damage foundations by heaving or pushing inward from the outside. Usually, this damage is localized and is easy to identify unless the tree has been removed.

Subsequent settling problems may occur as a tree’s dead roots decay and shrink. Although it is rarely done, the best practice is to remove the roots as well as the tree. 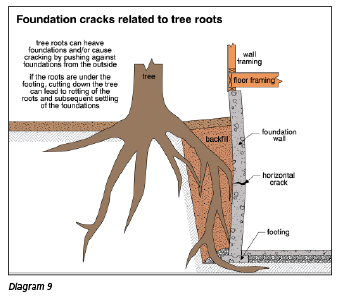 Be sure to include in your report information about trees that are too close to the foundation, whether or not they are causing any visible issue (Diagram 9). 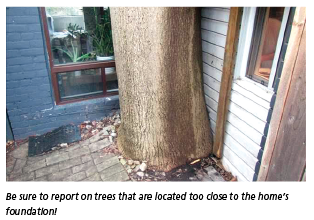 Backfilling
Damage during backfilling operations is common in original construction (Diagram 10). The damage may be done by heavy equipment or large rocks (rocks with more than a six-inch diameter). Concrete foundation walls are not very strong for the first several days. Forms should not be removed for at least two days after pouring. The longer the forms can be left in place, the better. The foundation walls are not supported laterally until the floor framing is in place. Equipment or backfilling pressures can do damage during this vulnerable time.

What to Do?
Although it’s not normally necessary to push walls back into their original position, it’s important for clients to know that they should find out whether the support for the superstructure has been compromised. If it has been compromised, clients will need to know that they should take additional steps to adequately transfer the vertical loads to the soil. It is also important for clients to understand that they may need to consider wind uplift forces. For example, if the foundation wall’s connection to the wall and the floor has been broken, then the client should know that they may need to explore engineering considerations.

Resolving foundation problems is not for the faint of heart. It is a specialized field and home inspectors should not make conclusive statements. Document what’s there, make sure your clients are aware of the potential implications and give them appropriate direction, which might include one or more of the following suggestions:

• engage a specialist to investigate the issue further

More details about foundations are included in the ASHI@Home Training Program (http://www.homeinspector.org/ASHI-HOME-Training-System).