By Frank Lesh | April 01, 2014
Being Frank Etiquette: the customary code of polite behavior in society or among members of a particular profession or group.

CLEARLY THE MEMBERS of the American Society of Home Inspectors ascribe to following this definition. Since we all earn a living from the public, it makes sense to be courteous to people … we never know who our next client may be. As the organization to which many of the best home inspectors belong, ASHI provides numerous benefits to its members in order to help them be successful in their business. One vital and enduring commodity ASHI provides is the ASHI Standard of Practice and Code of Ethics. However, one thing the SoP does not include is job-site etiquette. The SoP covers a multitude of components such as home inspector terminology, what we do inspect, what we do not inspect and our limitations. But one item not covered is how the inspector should act during an inspection.

Should the SoP cover etiquette? That’s an issue we may look at in the future. For now, though, let’s look at some behaviors that should be obvious. One of those is how to conduct an inspection in a respectful manner.

From time to time, we at ASHI HQ receive complaints from homeowners about the inspection process. Often, the complaint is registered because the homeowner believes the deficiency the inspector found is unjustified. One example goes like this:

The home inspector wrote, “There is severe cupping and curling of the shingles, which is exposing the felt. Although there are no signs of current leaks on the underside of the roof sheathing, these shingles are at the end of their useful life and should be replaced now.”

Because the homeowner has lived in his house for 35 years and never had a roof leak, he feels the roof is just fine and he thinks the inspector is just overreacting.

I would get complaints like that when I was inspecting, but I successfully answered them by turning the situation around by saying, in all sincerity, “Mr. Homeowner, if your daughter had an inspection at a house with shingles in that condition, what would you advise her to do?” Sometimes that worked and sometimes it didn’t. But often I would get an inspection from the folks who originally complained.

Another type of complaint is one we received the other day. The homeowner said the inspector walked through the house with muddy shoes. He left stains all over the carpet. Also, the inspector did not replace the articles he’d removed from the closet when he gained access to the attic scuttle hatch. The owner was an elderly widow who had a difficult time moving the objects back into the closet. She didn’t complain about the deficiencies he found, just the lack of courteous behavior.

I think successful inspectors realize they are guests in someone’s home. It may just be a house to us because we’re looking at the systems and components. But to the residents, it is their home. Etiquette is a standard of practice that should be adhered to as much as ASHI’s SoP. It’s the right thing to do.

This month, I’d like to introduce our new Director of IT & internet communications. Mike Rostescu started working for ASHI when he was a teenager. For over 10 years, he’s made ASHI his home away from home, with a brief hiatus working for a local tech company. I guess he had to see if the grass actually was greener. Fortunately for us, it wasn’t. 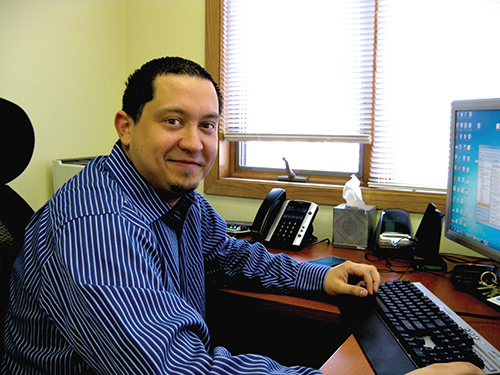