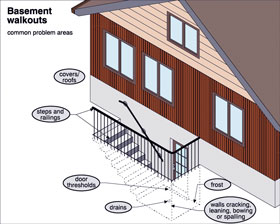 Note: This article applies to regions with basements that are subject to freezing temperatures.

Houses in cold climates may have an entrance straight into the basement from the outside. Creating this entrance usually requires soil excavation (except on sloped lots). The walls of the stairwell are retaining walls. A railing is needed to protect people moving up and down the stairs. A guard should be provided around the opening to protect people passing by the walkout. A drain at the bottom prevents the stairwell from filling up with water. The door opening should have a raised threshold to protect against water or snow from entering under the door.

Although simple to describe, basement walkouts are tricky to build. Basement walkouts, especially if added after original construction, should be inspected with caution. Basement walkouts typically have to resist lateral soil pressure and frost pressure. You will find few walkouts that are perfect. You will have to use your professional experience and judgment to evaluate the performance and identify what should be corrected. You should inspect walkouts from inside the home as well as outside. The illustration and the photo on this page show what things should look like. 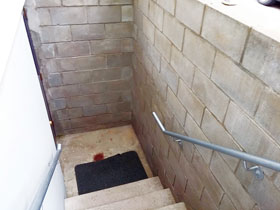 A well-constructed basement walkout with no damage to the retaining walls, a drain at the bottom and railings. Note: In new construction, the handrails would return to the walls.

Now let’s look at some of the problems to watch for. Problems with walkouts are commonly related to the following:

Damage due to frost heaving is a significant risk. Frost damage is likely to be most severe where the soil is wet. Good surface water management, including surface drainage and free draining soils, helps to minimize the risk.

Lowered footings. Including a basement walkout during original construction adds to the expense, but the foundation and footing system can be built lower in this part of the house to account for the greater frost depth.

When adding a basement walkout to an existing house, it’s a huge job to underpin the house foundations and footings in the vicinity of the walkout. A more common approach in many areas is to protect the walkout excavation from frost with rigid insulation before the walkout is constructed. This slows the rate of frost penetration into the soil and, if done properly, will help prevent frost heaving problems to the basement walkout and the adjacent house wall. 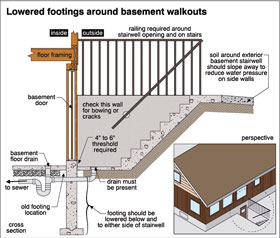 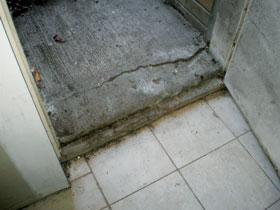 This crack is consistent with heaving as a result of frost penetration.

During the home inspection, you will not be able to determine whether the foundations and footings have been lowered, or whether insulation has been added to protect against frost damage. As with many things in a home inspection, you can’t review the design; you can only evaluate the performance.

Watch for evidence of structural damage to the home and the walkout. Look for walkout doors that don’t open and close freely and those that have been trimmed extensively. Look for doors that have buckled or been crushed. Look for cracks around door frames on the inside and outside of house foundation walls. Look at the house foundation walls for evidence of inward movement. This may be leaning or bowing. These often are accompanied by horizontal cracks.

Cracks, heaving, bowing. Look for bowing, leaning and cracks in the walls of the stairwell itself. The walls of the basement walkout must be built as retaining walls to withstand the lateral soil pressure. As previously discussed, the pressure exerted on one side of the wall by the soil can increase dramatically if the soil is wet, if the soil is expansive or if it freezes. The more water there is in the soil, the greater the hydrostatic pressure. 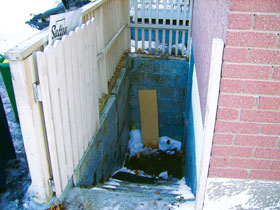 The left side retaining wall has a severe vertical crack due to frost pressure.

Moisture in soil. Even where there is no obvious damage, pay attention to drainage around the stairwell. If the ground slopes down toward the walkout, the frost damage is potentially great. Soil that contains no moisture won’t freeze and expand. The amount of water in the soil determines how much hydrostatic and frost pressure will develop. A granular backfill that is free draining and won’t hold moisture around the basement walkout is good. Silty clay is not as good. 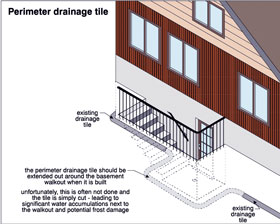 Tough to tell on new work. You won’t be able to see what, if anything, has been done to prevent frost damage in a basement walkout. If the walkout is relatively new, you will have to explain this limitation to your client. Remember that an inspection is a performance-based evaluation. It is not a design review, and it’s not crystal ball gazing. If it hasn’t been around long enough to prove its performance, you simply describe its performance as unproven.

Drains Drains are needed in the floor of uncovered basement walkouts because rain and snow will accumulate here. Overflowing gutters or poorly arranged downspouts also may dump a good deal of roof water directly into the stairwell. 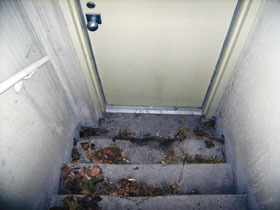 Here’s a poorly constructed walkout with a narrow landing, no raised door threshold and no drain.

No outside traps. Drains at the base of walkouts usually do not have traps because water in outdoor traps would freeze in the winter. The pipe from the walkout drain often connects to an interior floor drain pipe above its trap. This allows the walkout drain to use the trap of the floor drain. In any case, there should be a trap, but it should be inside the perimeter of the building where it is not susceptible to freezing. 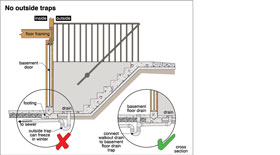 Other drainage possibilities. Sometimes the drain discharges to a French drain (buried gravel pit). On a sloping lot, the drain may discharge out through a hillside, well away from the building. Drains discharging to daylight should have grates to keep animals out. All drains must flow by gravity.

Drains may be missing, clogged or broken, or undersized.

Missing drains. There should always be a drain at the base of a walkout unless there is a watertight cover or roof above. The basement may flood, or there may be damage to the basement door. Make sure there is a drain if there is no watertight cover or roof structure. If you can’t tell because of snow and ice buildup, for example, let the client know that you could not verify that there is a drain. Explain the importance of a functional drain and recommend follow-up by the client.

Clogged or broken drains. A clogged drain is usually a minor maintenance issue. A broken drain is more serious and may be the result of building settlement or pressure from tree roots, for example. A clogged or broken drain has the same implication as a missing drain. Look at the drain to see if it’s clear. The drain should have a grate to keep debris out. There should be no standing water in the drain. Look also for a high watermark on the door or on its frame or on the walls or steps, suggesting chronic drain problems. Look for staining or debris accumulation around the drain, which may indicate blockage or damage. The drain may be clogged or broken somewhere you can’t see.

It is beyond the scope of a home inspection to flow-test drains. Never say a drain is working properly or is correctly sized. It’s more appropriate to say that you see no evidence of issues, if that’s the case. Better still, in our opinion, say nothing if you see no issues and only report adverse conditions. Alternatively, you can say that the system was examined and no adverse conditions were observed.

Undersized drains. Walkout drains and drain pipes should be a minimum of three inches in diameter. Smaller pipes will clog more easily and may not have enough capacity to handle a sudden downpour. An undersized drain pipe is an installation defect. Check the size of the drain opening, and make sure the pipe under the opening is the same size. Although a drain smaller than three inches may have been there for some time and may look like it’s working adequately, you should report this as not consistent with generally accepted practices.

A Word About Basement Egress Window Wells Retrofit basement egress window wells have many of the same conditions we’ve described in this article. Keep these issues in mind when looking at window wells.

Summary In this article, we’ve introduced basement walkouts and some of the common issues associated with them. In the ASHI@HOME training program, this discussion is extended to address door thresholds, steps and railings, guards and walkout covers. We also detail the causes of problems, implications and strategies for inspection.

Thanks to Kevin O’Hornett and Roger Hankey for their valuable contributions to this article.