Once again, The Word invites you to travel into the dark realm of subjects that sometimes are misunderstood by home inspectors. The Word hopes you will find this trip informative and maybe a little entertaining.

Previously, we discussed some general guidelines about when it may be appropriate to apply new standards to old homes. Let's review. One usually does not need to upgrade existing work to current standards if the existing work is legal and safe. Legal work complied with standards and manufacturer's instructions, if any, when the work was done. New work and addition to, extension of, replacement of and major repair of existing work should comply with standards and manufacturer's instructions in effect when the work was performed.

Basements should have at least one switch-controlled light regardless of whether or not the basement is habitable. There also should be a light near furnaces/air handlers and electrical panels located in a basement to help people safely work on these components. The light switch should be located near the entrance to the room.

Ventilation provides habitable rooms with air from outside the home. Habitable rooms need ventilation to dilute stuff in the air that could make people sick. Examples of such stuff include volatile organic compounds (off-gassing from building materials like paint and carpet) and the carbon dioxide that we all exhale. Ventilation also may provide combustion air in homes that contain fuel-burning appliances (including fireplaces). Ventilation could be the subject of an entire The Word. For now, let's keep it simple.

Another means of providing ventilation is necessary if the home has been built, or has been air-sealed, to the point that leaks don't provide enough outside air. A duct running from an HVAC return boot to the outdoors is a common method in some areas. A whole-house mechanical ventilation system (a heat recovery or energy recovery system) is another method.

Here's a ventilation tip. Watch for evidence of air-sealing (also called weatherization) in older homes, especially in homes that contain fuel-burning equipment. Air-sealing done too well can create air quality problems. A blower door test may be advisable for air-sealed homes that don't have a means to provide outside air.

Cooling isn't required to make a room habitable. Good luck selling that idea in many parts of the country. You may want to point out the lack of cooling if cooling is expected in your area.

It doesn't matter if a habitable room is located in a basement or above grade; the minimum ceiling height is 84 inches (7 feet). Height is measured from the finished floor to the lowest projection from the finished ceiling, ignoring components such as light fixtures and ceiling fans. Hallways, bathrooms and laundry rooms are included along with habitable rooms when determining minimum ceiling height. There are exceptions for rooms with sloped ceilings and for bathrooms, and we've covered these in a previous column.

In newer homes, the minimum ceiling height is 80 inches in basements without habitable rooms. This minimum is reduced to 76 inches under beams, ducts and similar obstructions.

Most basements in new homes need at least one escape and rescue opening. Basements less than 200 square feet and used only for storage or for mechanical equipment are exempt from the escape and rescue opening requirement. Note that the reason for this requirement is not only to allow people to escape, but also to allow rescue personnel with protective equipment to enter.

When you're looking at a room, you might wonder if it's a bedroom for purposes of the escape and rescue opening requirements. There is no generally accepted definition of what constitutes a bedroom (or sleeping room). Ask a real estate agent and she'll probably say a room with a closet and a door. That's an American-centric definition. In many parts of the world, clothing is stored in furniture, so a closet isn't necessary to make a room a bedroom. You may want to define a room that could be used as a bedroom as a bedroom for purposes of escape and rescue opening requirements and make your recommendation accordingly.

People should be able to get through the escape and rescue opening without needing a ladder or similar device on the inside of the building. From the finished floor to where the clear opening begins should be not more than 44 inches.

Many basement escape and rescue opening windows will need a window well. The well floor must have an area of at least 9 square feet and a minimum dimension of 3 feet. A securely attached ladder is required if finished grade is more than 44 inches above the well. The ladder rungs must be at least 12 inches wide with vertical spacing less than 18 inches, project at least 3 inches from the well wall and project not more than 6 inches into the minimum well dimensions. See Figure 1. Any security cover over the well must be operable from inside the well. Don't forget to check for a means to drain water that may enter the well. 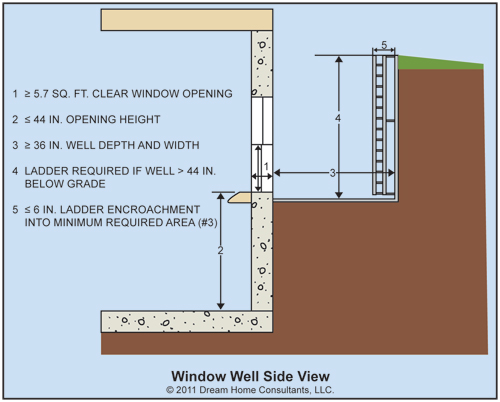 Two components are common to many basements that have plumbing fixtures: the sewage ejector pump and the backwater valve.

A backwater valve is a one-way check valve that lets water flow toward the sewer, but doesn't let gross stuff from a clogged sewer into the home. A backwater valve is required when a plumbing fixture flood-rim level is below the level of the nearest upstream sewer manhole cover. While backwater valves are most common in basements, one could be needed if any floor of the home is below street level. Figure 2 shows a typical backwater valve installation. It's easy to miss calling the absence of a backwater valve. Remember to look for one when one is needed. 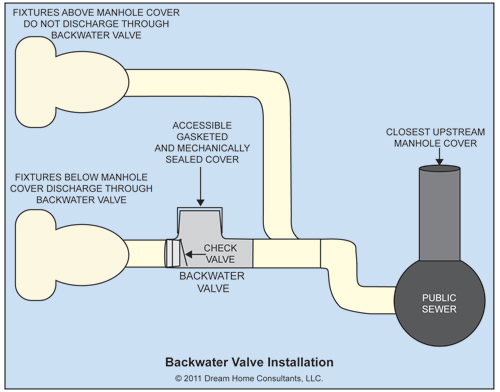 Basement and moisture are so closely related that they are almost synonyms. Finished basements are scary because it's so easy to get the moisture-related details wrong and because you can't usually see any of these details. The only really effective way to prevent basement moisture problems is on the outside, so we'll deal with that briefly.

Basement walls should either be waterproofed or dampproofed on the outside wall below grade. Waterproofing is better at retarding both liquid water and water vapor and, if done properly, should last for the life of the home. It is more expensive, so it is much less common. Dampproofing is okay at retarding water vapor and a little liquid water. Dampproofing is far more common. Unfortunately, dampproofing may break down over time (30-40 years) and lose its effectiveness.

Grading, drainage and gutters always are important around basements and especially around finished basements. It's important to check for these and make sure they are better than the required minimums if the basement is finished.

It's reasonable to believe that the HVAC system wasn't sized to accommodate a finished basement. An improperly sized system could cause comfort and functional problems in the basement and in the stories above. Determining HVAC system size is way out of scope, but most experienced inspectors have a good feel for what works in their area. You do a great service for your client by pointing out a possible HVAC capacity problem and recommending a Manual J and Manual S analysis by a qualified contractor.

Basements are inexpensive square footage, so finishing them is a great way to increase the value of a home, if done well. Basement finishing often is done poorly, creating problems for clients and liability for us. Be sure to take extra time and care when inspecting finished basements.

Memo to the gods of remodeling: The Word does not reside on Mt. Olympus (just at its base) and welcomes other viewpoints. Send your lightning bolts or emails to Bruce@DreamHomeConsultants.com. The thoughts contained herein are those of The Word. They are not ASHI standards or policies.