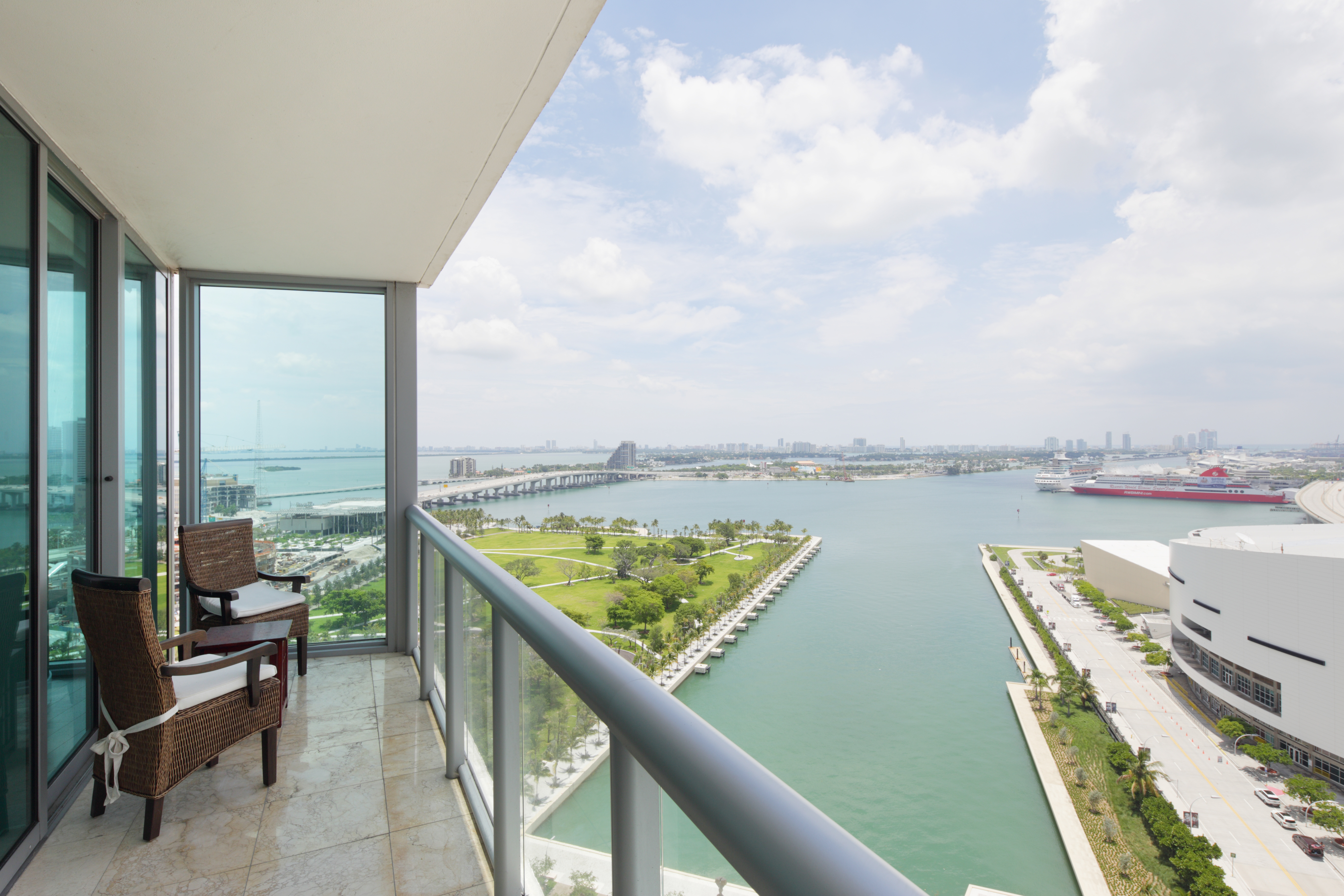 Joists
Joists and beams both perform similar functions, but joists are smaller and are used to support flooring directly. Joists transfer loads from flooring or decking to beams or walls. Usually, joists are spaced 16 or 24 inches on center. Because typically there are several joists in the structure, the failure of any one joist is less important than the failure of a beam. However, the problems we discussed with beams (refer to the first part of this article in the May 2018 issue of the Reporter) all apply to joists as well.

Most of the time, you’ll see wood joists. There are new products being used in exterior construction; many of these are made of recycled plastic or are mixtures of plastic with wood. The same inspection techniques apply, but some problems (for example, rot) won’t be found and others may develop that are peculiar to these materials. Time will tell.

Joists may be supported on top of beams, ledgerboards or other framing members. Joists also may be supported by metal brackets called joist hangers. A properly installed joist hanger may be a more secure connection than a joist resting on a beam. Joists resting on beams are typically toe-nailed to the beam. Although gravity provides a good downward anchoring force, there is less protection against uplift than with a joist hanger. Also, the end of the joist is better restrained from twisting or other lateral movement with a joist hanger.

These joist hangers and their fasteners may or may not be resistant to corrosion, although in most jurisdictions, they should be. (Note: Several joist hanger manufacturers denote a hanger for exterior use with a “Z” in the part number; the part number usually is stamped somewhere on the hanger.) Joist hangers should be checked for rust. Joist hangers also come in different sizes. A joist hanger that is intended to be used on a 2 x 4 will not be effective on a 2 x 10. Some 2 x 8 hangers can be used for 2 x 10s, for example, but this ultimately depends on the manufacturer. The manufacturer’s website generally will have the specifications available for download.

It is very common to find that joist hangers have not been nailed properly. With very few exceptions, all of the holes in joist hangers are intended to have nails. Skimpy nailing or the use of improper nails can lead to failure of the joist hanger and movement of the joist. Aside from specialized structural fasteners, screws are typically very weak in shear and should not be used in joist hangers. The end bearing for joists should be at least 1½ inches, even on joist hangers.

Many elevated decks are built with poor lateral stability and will rack (that is, move side to side) easily. A deck does not have to move very much before connections weaken. Cross-bracing can help reduce racking; in fact, in situations in which the deck height exceeds a certain level, cross-bracing is required in many jurisdictions.

WHEN INSPECTING A BALCONY OR DECK, LOOK FOR SAGGING JOISTS. SAGGING COMMONLY OCCURS BECAUSE OF ONE OF THE FOLLOWING REASONS:

One of the best ways to check for sagging is to scan the floor surface with your eye at deck level. The other is to bounce while standing on the balcony. If you discover a sag, try to determine the reason. You should have a rough idea of what size lumber on what spacing can span what distance. Look for increased loads such as piles of snow that drifted or were shoveled off the roof onto a deck. If you can access the space under the structure, look for damage and probe the joists for rot. Watch for missing or ineffective beams.

As previously noted, joists usually are toe-nailed to the surface on which they rest (for example, a beam) or are hung in joist hangers. Fasteners may be missing, rusted, loose or the wrong type.

Look for flush-mounted joists that are nailed without joist hangers or ledgerboards. This is a weak connection—you should recommend reinforcement. Fasteners should be corrosion-resistant. Hot-dipped galvanized (HDG) nails are common and generally required for exterior applications that are directly exposed to weather. Roofing nails, electroplated nails, finishing nails, drywall screws or general construction screws are not appropriate fasteners, for example.  Also check the number of fasteners. Are there enough? Are they rusted or loose?

Ledgerboards
The ledgerboard is like a joist attached directly to the house wall. Typically, joists are supported on the ledgerboard. Joists may sit on top of the ledger or be secured to it with joist hangers.

The ledgerboard may be attached to a wood-frame structure by lag bolts into studs or the rim joist every 24 inches. You also may see multiple nails every 16 or 24 inches. For attachment to a concrete or masonry foundation, you may see bolts set into lead plugs (lag shields), sleeve anchors or masonry screws.

ISSUES WITH LEDGERBOARDS INCLUDE THE FOLLOWING: 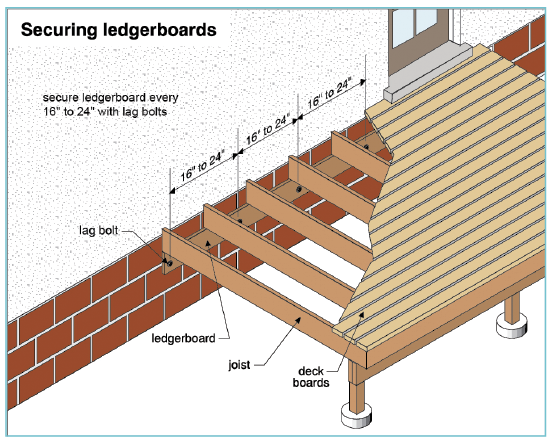 Look for rot in the board itself. If possible, probe it with your screwdriver or an awl. The proper ledger construction detail (when installed over a wood-frame wall with siding) is to install a flashing that extends up behind the siding and out over the top of the ledger. This detail is often omitted, however.

Although cantilevering can be a dramatic architectural detail, it can be very troublesome, functionally. Many cantilevered joists are conventional-framing lumber such as spruce, pine or fir. These species work well indoors, but they are more prone to rot than cedar and other rot-resistant woods normally used for decks.

Some builders use pressure-treated lumber for cantilevered joists.
Cedar is also rot-resistant, but it is not a particularly strong wood and is not normally a good choice for cantilevering.

PROBLEMS WITH CANTILEVERED JOIST INCLUDE THE FOLLOWING:

Many cantilevers are overextended and the deck or balcony is springy.

The most common problem with cantilevered decks is the difficulty in maintaining a weather-tight joint at the point at which the joists pass through the house wall. These joints typically move as a result of expansion and contraction caused by changes in moisture and temperature.

This area is hard to access because it is usually out of sight from above and it may be well above eye level when viewed from below. Caulking is usually the only protection of the joint between the cantilevered joists and the house wall. Caulking may be imperfect when it is installed or it may deteriorate over time. Rot in cantilevered joists and water damage to the wall assembly are common problems.

Where the interior sections of the cantilevered joists are not well secured to other joists and framing members, the inboard ends of the joists can rise, causing bumps in the floor as the outboard ends are depressed.

PROBLEMS WITH CANTILEVERED DECKS OR BALCONIES MAY BE THE RESULT OF THE FOLLOWING FACTORS:

Cantilevered decks should be viewed with caution. Many inspectors use a ladder, if necessary, to examine the cantilevered joists at the point of penetration through the wall. Probe the joists with a screwdriver or awl. Look for gaps. Note the location of the cantilever so you can check inside the home for evidence of water damage or a bump in the floor. 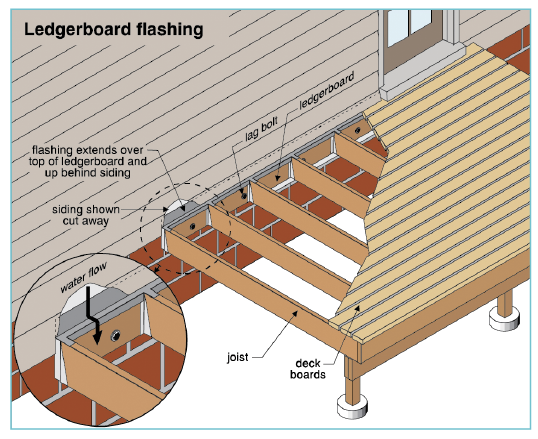 Wood Floors
Wood floors, whether on decks, porches, balconies or landings, are going to rot eventually. Rotting floors can be a safety hazard.

People often discover rot by accidentally putting a foot through a floor board. When dealing with an elevated deck or balcony, you could be identifying a life safety issue or, at the very least, an injury hazard.

Walk the entire surface of the floors of decks and porches. Bounce on the floors near the midspan to check for excessive deflection. Check for rot with a screwdriver or awl, particularly at vulnerable places. By now you know that those vulnerable places are the horizontal joints where water might get hung up (at a railing post, for example) or where end joints of wood are exposed. 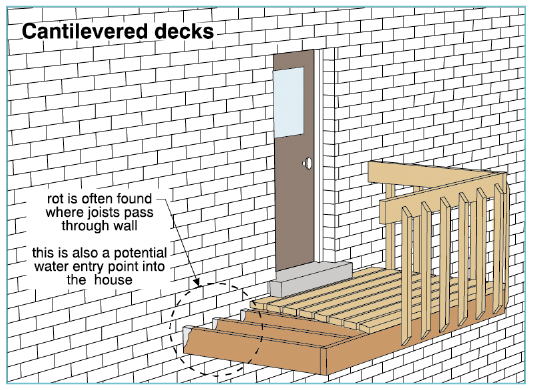 Most decks have adjacent boards butted tightly end to end. This detail always occurs over a joist in the deck so that both boards will be supported. Rot is common here because the vulnerable end grain is exposed. The situation is worsened by the joist below that holds water that can be absorbed into the end grain. Some deck builders protect against rot in these areas by leaving a slight space between deck boards that are butted end to end. Some take additional measures, using double joists under this detail so that the adjacent deck boards are supported by different joists spaced 1 or 2 inches apart. This allows water to fall past the end grain of the boards. Sealing the end grain with stain is helpful, but it is difficult to do once the deck has been built. 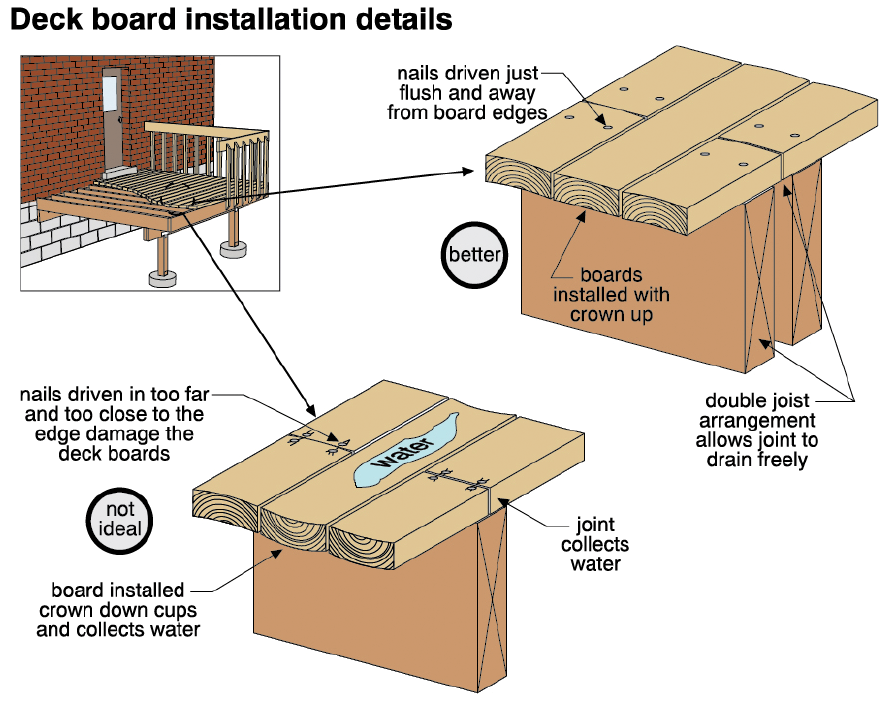 Pneumatic nailers can lead to premature rot. If the nail heads are driven well below the wood surface (as is common), little cups in the deck boards are created at the nail heads. Each of these cups fills with water every time it rains and the water has no place to drain. To make matters worse, the nail heads usually have broken several fibers and the end grain may be exposed here. Decks often rot around their nails because of this problem. We prefer to see deck nails driven flush, not below the wood surface. This also applies to deck screws, which are often driven too deep with a drill or impact driver.

Deck boards should be installed crown up so that if they cup slightly as they dry, the cup will be on the bottom of the board and water will run off the crowned top. Again, we want to avoid holding water against the wood.

Another cause of rot on decks and balconies is carpeting. Carpeting holds water against the wood and prevents it from drying. Carpet will shorten the life of wood decking. Be careful not to mistake polyvinylchloride (PVC) membranes for carpeting. A roof membrane will protect the wood below. Some of these single-ply membranes have a carpet-like surface. The membrane will be flashed at the edges and will extend up walls and down over edges. It is a continuous, single-ply membrane. PVC is a watertight skin, whereas carpeting allows water to flow through it.

Individual deck or porch boards can sag. This is different from joist sagging. Sagging of floors will show up as a repetitive wavy pattern.

THE USUAL CAUSES FOR SAGGING ARE THE FOLLOWING: 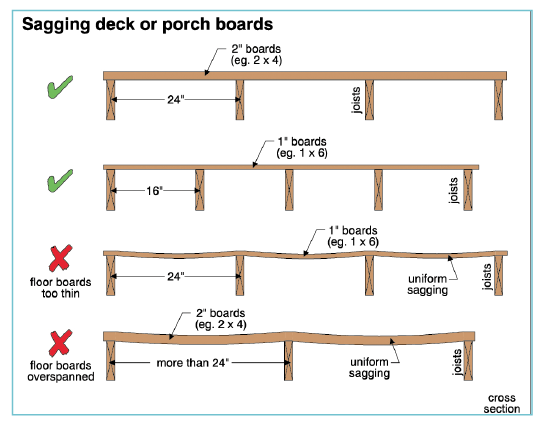 The floor will be springy and may be weak enough to break under heavy localized loads. As you walk on the floors, pay attention to localized deflection under your foot. Also, look for a repetitive wavy pattern along the floor. It’s a good idea to walk heavily on a deck or porch to check for bounce or spring. Roughly, 1-inch boards need joists every 16 inches, and 1½-inch boards (2 x 6s, for example) need supports at least every 24 inches.