Balconies are exterior structures that project from the building at least one story above grade. There is usually a door that provides access to the balcony. Balconies do not have steps, and there is no access to grade level. They are most often constructed of wood, metal or concrete. 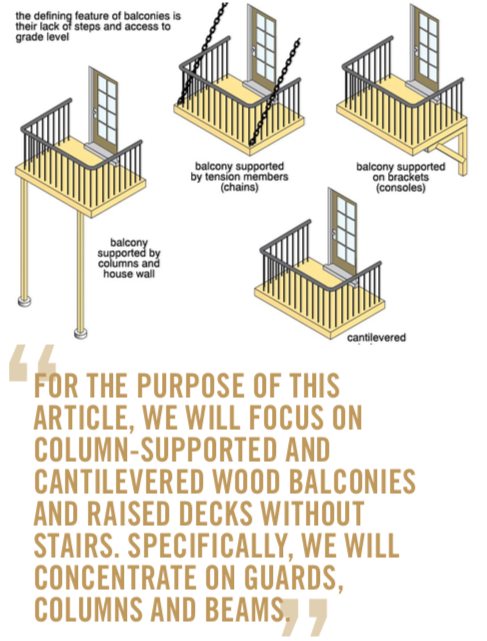 For the purpose of this article, we will focus on column-supported and cantilevered wood balconies and raised decks without stairs. Specifically, we will concentrate on guards, columns and beams.

Guards
Guards or guardrails keep people from falling off balconies and decks. Handrails and guards are safety devices. The implication of non-performance is, of course, serious personal injury. Rules vary by jurisdiction. Typically, exterior guardrails are required on any platforms more than 2 feet to 30 inches above grade. Check your local building standards to see which applies.

In many areas, the guardrails must be 42 inches high around decks and balconies. In other areas, they can be 36 inches high if the deck or balcony is less than 6 feet off the ground. 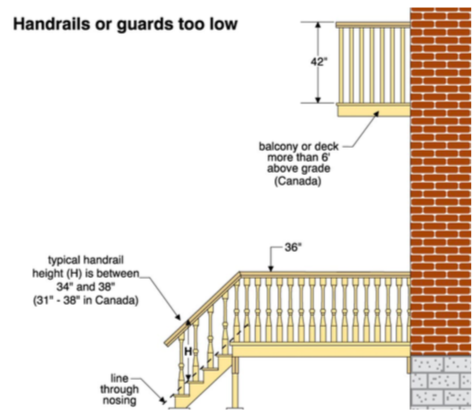 Guards must be constructed so that people cannot fall through. This is particularly important in homes where young children may be expected to “test” the railings. In some jurisdictions, spindles (also called balusters) must be designed so that no opening will allow a 4-inch ball to pass through. In other jurisdictions, the ball size is 6 inches. Again, check with your local authorities to determine the requirements in your area. You can recommend something different, but you must know what the minimum standard is for new work. 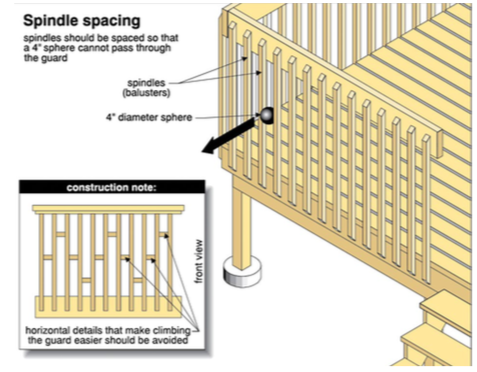 Spindles should be substantially vertical. Railings with many horizontal details can be climbed easily by children and, as such, they are a safety hazard. Spindles are not allowed by some authorities.

Columns
Columns typically support decks and balconies. Columns transfer loads from joists or beams to foundations, footings or both.

Columns can be made of several materials. Some columns have a wood upper section and masonry lower section. Most round wooden columns larger than 6-inch diameter are hollow. They are made like barrels. The most commonly used wooden columns are solid square lumber. (Note: Typically, 6 x 6 lumber is required when the deck or balcony surface is more than 6 feet above grade; check your local building codes.)

Some columns are metal. They can be circular or rectangular; the majority of metal columns are hollow. Some poured concrete decks and balconies have solid concrete columns. Masonry block columns also can be found. In some cases, wood or steel columns are surrounded by decorative brick.

Most of the time, it is safe to assume that a column was installed straight and plumb; however, columns may shift because of the following factors:

• greater loads than were intended

• deterioration of the column or its connection points

• columns poorly secured at the top or bottom 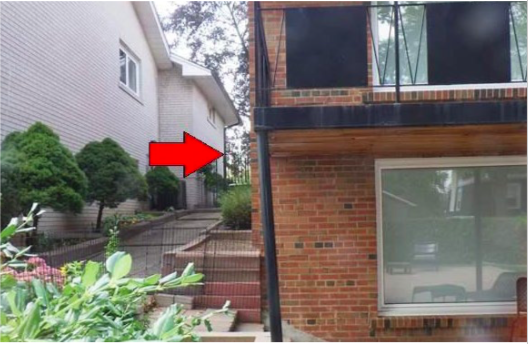 Columns that have moved may allow the structure they support to fail. These columns may be expensive to stabilize. Look carefully at columns, particularly at the top and bottom of them, for evidence of movement. Examine the columns from several angles. Stand well back from the structure to look at the columns, as this gives a larger frame of reference and makes it easier to determine whether the columns are leaning.

Push on the column near the bottom and near the top, if possible, to ensure that it is well anchored. In homes where wooden decks or balconies are well off the ground, stand on the deck and shift your weight from side to side to see if the deck moves. If so, the deck may need diagonal bracing.

Wood columns sitting in the soil will eventually rot, irrespective of the type of wood. The bottom of a metal column will rust if it is too close to the soil. Metal and wood columns should have footings that extend above ground more than 4 inches.

Beams
Beams may be found on many structures including decks, porches, balconies and carports. They may support a roof or a floor, but in either case, their function and orientation is similar. Beams are important load-bearing members, transferring loads from joists to columns or walls. 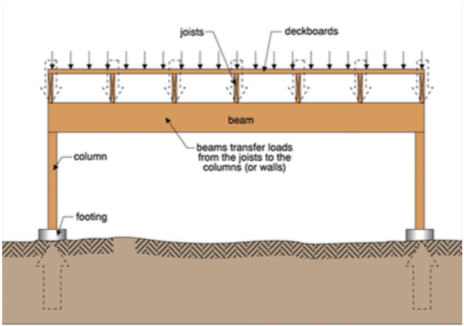 Home inspectors should look along beams for evidence of sagging. This suggests non-performance of the beam, and may signal expensive repair work or impending sudden structural failure.

• They are undersized or over-spanned.

• Loading is greater than what they were designed for.

• Rot, mechanical damage, holes or notching has weakened the beam.

• A column, often near a midpoint, has been removed. 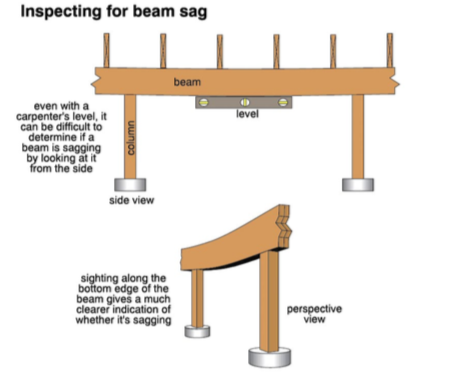 Structural failure is the ultimate implication. In most cases, sagging beams can be identified and repaired or replaced before things collapse. When inspecting, look along the beam if possible, using other horizontal reference points.

Beams rely on at least 31⁄2 inches of end-bearing to transfer their loads to the structure below (usually columns or walls).

End-bearing may be poor because of the following factors:

One cause of poor end support is shifting of columns that support beams. If a column shifts and rotates away from the building, a beam may lose its support at the column end. If the beam moves with the column, the end of the beam resting on the house wall may be pulled out of its pocket.

Beams resting in masonry pockets should not be mortared in tightly at the ends. There should be space allowed for ventilation so that the wood can dry after it gets wet.

Examine beams at pockets for signs of the beam having pulled out of its pocket. The beam end may not have paint on it or it may be a different color because of less exposure to sun.

At connection points to columns, watch for evidence of movement of the beam relative to the column. Again, a section at the end of the beam may be unpainted, for example. Check whether beams are mechanically fastened to their supporting members below. Beams should not simply rest on the tops of the columns or pillars. 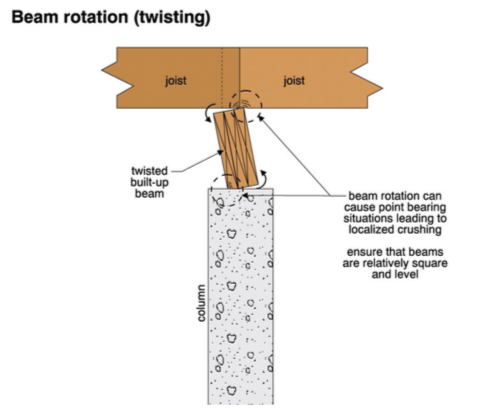 Beam rotation (twisting) can lead to a lack of support for the joists resting on the beam, and can disturb end-bearing conditions for joists and the beam. Twisting of a wooden beam is usually caused by uneven drying and shrinking of wet lumber. Crushing fibers and beam failure may result. In severe cases, building components may fail as a result of beam rotation. Ensure that beams have remained relatively square and level. 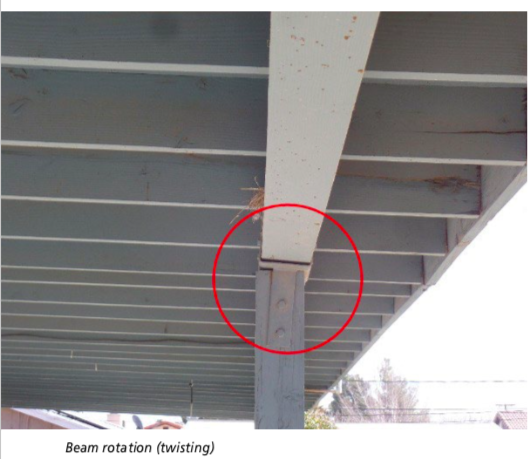 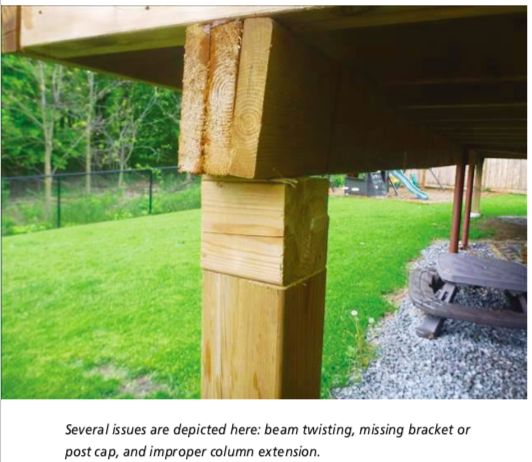 A wooden beam on the outside of a house is also susceptible to rot or insect damage. Some deck builders go to great lengths to prevent individual beam members from trapping water. They use thin, triangular wood spacers between built-up beam members to ensure that water can flow freely between adjacent 2 x 8s in a beam, for example. This space also provides ventilation, allowing for quick drying after the wood gets wet. Alternatively, some builders run a bead of caulking along the upper joint of a built-up beam. These are good details but, unfortunately, not common ones.

• water penetration and retention as a result of poor protection, drainage or horizontal surfaces

• missing or poor paint and stain

Again, structural failure is the implication of rot. When inspecting, look at places where water may be trapped in or against the beam.

Probing with a screwdriver is required. Rotted wood can sometimes look just fine from the outside. Built-up beams are susceptible to rot because water often gets trapped between beam components.

Insect exit holes in the wood surface are clues to possible damage. Paint or stain that has not been well maintained makes wood more vulnerable to rot. If the paint or stain is not in good repair, check closely for rot.

Watch for Part 2 of this article series in the June issue of the Reporter. We will examine joists, ledger boards and floor boards.