Most home inspectors would agree that water is the No. 1 enemy of homes. We usually think of roof and plumbing leaks, surface water leaking through foundations and other similar examples. These situations are called bulk moisture, which is the most visible way that moisture moves through buildings. The following list covers all four ways that moisture moves through buildings:

In a nutshell, warm, moist air that leaks into walls condenses as it cools, trapping water in the wall, which leads to mold and rot. It’s important for home inspectors to understand what’s happening so they know what to look for during inspections.

This article will focus on heating climates. The same principles apply to cooling climates, although the issues are slightly different.

How does moisture get into the air?
Air is able to hold moisture as a vapor. Moisture in the air comes from the following:

A family of four can generate 10 to 12 gallons of water a week by just going about their normal household activities. Humidifiers can add considerably more water to the air. Unprotected soil in a crawl space can contribute 10 gallons a day!

How much water can air hold?
The amount of water in the air is described as either absolute humidity or relative humidity.

To summarize, cold air can hold very little moisture. Warm air can hold a lot of moisture. Cooling the air causes condensation. The more moisture it has, the less it has to cool to condense.

How much humidity?
People are comfortable with humidity in the range of 30% to 50% RH. When it’s freezing outside, it is best for buildings to have <15% RH to avoid condensation, mold and rot. People usually get their way. 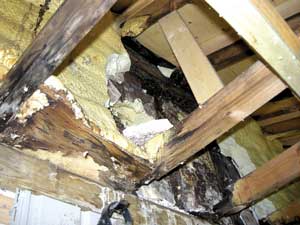 What does it all mean?
The air in a home at 70°F and 40% RH will be saturated if it cools to 45°F. Condensation will form in the winter when warm, moist house air leaks into cold wall or roof spaces. The outside wall temperature will be close to the outdoor temperature. As air leaks through the wall or roof, it will cool and the water vapor will condense inside the wall or roof assembly. This can lead to water damage, mold and rot inside the wall assembly. This can go unnoticed for some time until considerable damage occurs.

The water damage, mold and rot inside of this exterior wall assembly was a result of the extreme moisture from an indoor pool that was not managed properly. This structure had to be torn down.

How do we prevent condensation?
We can reduce the indoor humidity, but generally, people are not comfortable with that. We try to stop the air leaking into wall assemblies with drywall, polyethylene air and vapor barriers, building wrap, and foam insulation, among other materials, but perfection is hard to achieve. Air barriers that are 99% effective are not effective at all, in the same way that a balloon with a tiny hole in it won’t hold air.

Another strategy is to let the air escape quickly outdoors before it can condense. Attic ventilation is a good example. Breathable exterior siding (wood, vinyl and aluminum siding) is more forgiving than barrier systems like stucco and exterior insulation finishing systems (EIFS). It’s risky to rely on this approach, although it was very effective in older homes with air-leaky, poorly insulated walls. The walls were warmer and the air escaped more easily than in today’s tight, energy-efficient construction.

What do we watch for?
Damage in walls can be difficult to identify until the damage becomes extensive. Moisture runs down, collecting on sill plates inside the wall. There may be visible evidence of water at baseboards and quarter rounds. Moisture meters and infrared cameras can help identify concealed water problems.

Although there could be many variables in play, condensation on windows is an indicator of possible problems and should be a clue for a home inspector to look further.

Water damage and rot on the interior sill of this window is a result of condensation, which commonly occurs with single-pane or poorly insulated glazing combined with high interior humidity levels.

Conclusion
This article reviewed air-transported moisture that can cause wall damage in cold climates. The ASHI@HOME training program provides a more comprehensive explanation of the building science, as well as home inspection strategies.

Thanks to Roger Hankey for his significant contributions to this article.