Air conditioning systems rely on movement and the change of state (evaporation and condensation) of refrigerants between an outdoor condenser coil and an indoor evaporator coil. The lines that carry the refrigerant between the evaporator and condenser coils and through the compressor and expansion device typically are copper. The larger line typically carries a cool gas and is insulated. This is commonly referred to as the suction line, but it is also called the return line or vapor line. The smaller uninsulated line typically carries a warm liquid. It is most often called the liquid line. Where the evaporator coil is higher than the condensing unit, the suction line should slope down toward the condensing unit with a slope of at least ¼ inch per foot to allow oil to flow back to the condensing unit. The oil, which is used to lubricate the compressor, travels with the refrigerant through the system.

Any extra piping may be coiled near the evaporator coil. The line should be coiled horizontally rather than vertically. Again, the lines should allow oil to flow back to the condensing unit. With R-22 (old refrigerant), operating pressures in the lines are typically in the order of 70 psi on the suction side of the system and more than 230 psi on the discharge side. R-410A (modern refrigerant) might have a suction pressure of about 120 psi and a discharge pressure of 380 psi. There is considerable variation in these numbers and they are not critical for home inspectors to know because we are not testing refrigerant pressure. Because refrigerants are a gas at atmospheric temperature and pressure, leakage through the lines will dissipate as a gas and may leave an oil residue. At atmospheric pressure, R-22 has a boiling point of roughly -41°F, and R-410A is around -63ºF. 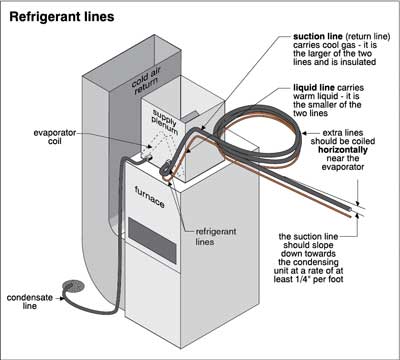 In some installations, you will find a filter/dryer in the liquid line. Filter/dryers clean and dry the refrigerant. Installers often add these to a system when the compressor is replaced or if a refrigerant leak has required recharging. They help remove any contaminants. They are roughly the size and shape of a soft drink can. They may be located in the liquid line near the condenser outlet or near the expansion device, close to the evaporator. Many have an arrow on them to show the direction of flow. If possible, check that the arrow is pointing in the right direction. Bidirectional units with arrows pointing both ways are acceptable. 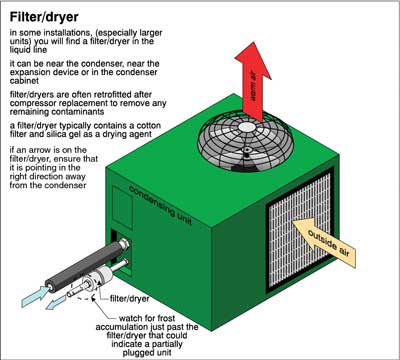 Frost accumulation just past the filter/dryer indicates a partially plugged unit and service should be recommended.

Some air conditioning units and most heat pumps have accumulators designed to prevent liquid from getting into the compressor. Compressors are designed to pump gases and become damaged if liquids are introduced. Accumulators on air conditioning systems typically are located in the condenser cabinet just upstream of the compressor. Typically, they are metal cylinders, with refrigerant lines going into and coming out of the top. There is not much to inspect.

A sight glass may be installed on the liquid line, usually near the condenser. This allows the service person to check refrigerant levels. If bubbling is noted in the sight glass on an R-22 unit, this indicates possible problems and service should be recommended. It is unlikely there will be a sight glass on an R-410A system, but if there is, bubbles do not indicate a problem. The sight glass is about 1 inch in diameter. Many sight glasses have a colored ring. If the ring color changes, this indicates moisture in the refrigerant. This is a serious condition. As little as one tablespoon of moisture in the refrigerant system will destroy a compressor in a few months.

Sight glass is more common on commercial systems than on home air conditioning systems. Sight glass is especially rare on newer residential equipment, as charging methods have changed over the years.
Common refrigerant line problems include the following:

Oil residue on the line usually indicates a leak in the piping, often at a connection. Because oil travels through the system with the refrigerant, a leak often will show up as an oil stain. Escaping refrigerant boils off and leaves no trace other than the oil. 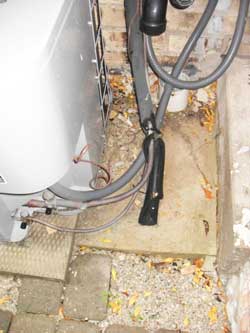 Causes
Refrigerant leakage is usually the result of corrosion or mechanical damage.

Corrosion and sludge
Corrosion is often the result of contaminants in the system: copper lines touching galvanized ductwork or other dissimilar metals; or a corrosive atmosphere in the house caused by chemical storage, furniture refinishing, gypsum board with high sulfur content (Chinese drywall) or some other reason.

Settlement
Settlement of the condenser or building can stress the copper lines. People playing or working around the air conditioner may step on the lines. The lines running through the house can be damaged by driven nails or careless handling of storage, for example.

Implications
If the refrigerant leaks out, the system performance will deteriorate and the house will be less comfortable. Ultimately, the compressor may fail or the system may shut down.

Strategy
Since refrigerant lines do not have any connections or joints that may leak except at the coils, concentrate on the connections to the coils at either end, where visible. If there is a thermostatic expansion valve, check its connections. Check along the length of the line for evidence of mechanical damage, particularly in exposed areas and at the interior and exterior penetration points through the house wall. Refrigerant lines need support so that joints aren’t stressed under the weight of the lines. On attic units, pay attention to where the lines disappear into walls or ceilings. 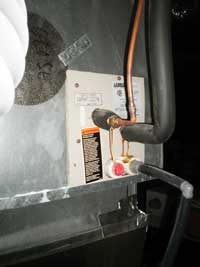 Lines through the wall
Where refrigerant lines go through walls, the hole in the wall should be considerably larger than the refrigerant lines, and the lines ideally should be (but are not commonly) in conduit at the point at which they go through the wall. The flexible material should seal the inner and outer ends of the conduit to allow movement but also to prevent moisture and insects from entering the building and to prevent heat from going out of the building.

Oil Stains
Look for evidence of oil stains on the refrigerant lines. Service technicians use leak detection fluids, halide torches or electronic leak detectors. These are beyond the scope of home inspectors. 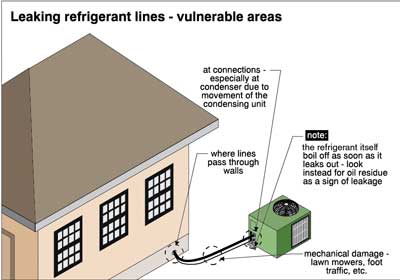 The large-diameter line (suction line or gas line) should be insulated along its entire length. The insulation has two functions:

Causes
Insulation may be missing because of the following reasons:

Strategy
Look for the insulation to be intact along its entire length. Pay particular attention to the outdoor section of the suction line. 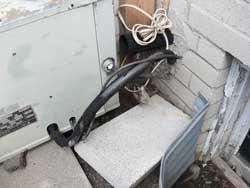 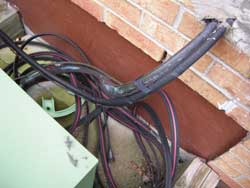 In this article, we introduced several important topics related to refrigerant lines from air conditioners. You can find much more information in the ASHI@HOME training program.

Thanks to Roger Hankey and Kevin O’Hornett for their thoughtful review and input.