When, in 1976, visionary home inspectors established the American Society of Home Inspectors, their commitment included high standards, ethics, education and certifications for members. They also understood the critical importance of maintaining public trust.

ASHI members know that a home inspection provides essential information about safety for the people who live in the home. That’s why homeowners, real estate professionals and the media respect and trust ASHI for its Standard of Practice, professional resources and knowledgeable members who can identify current and potential concerns and challenges.

In celebration of ASHI’s 40 Years of Trust, four ASHI members shared their memories. You’ll see that their experiences and perspectives reflect their pride in ASHI membership. 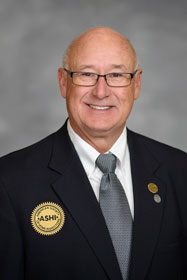 “For 40 years, ASHI inspectors have been trusted in the inspection community to provide accurate, knowledgeable information to educate, inform and assist homebuyers, home sellers and real estate agents. ASHI has worked with these groups, along with federal, state and local jurisdictions, to establish this trust throughout ASHI’s history. Everyone has heard the phrase ‘For Your Protection Get a Home Inspection,’ which is even used on government documents. Where do you think this phrase came from? Yes, ASHI. Our presence on the federal level without a doubt has established ASHI as the professional leader in the home inspection profession. ASHI works with HUD and other allied professional organizations for the good of all inspectors, not just ASHI members.

“Backing the ASHI Standard of Practice is Knowledge. ASHI’s mission statement sets this goal: ‘To set and promote standards for property inspections and to provide the educational programs needed to achieve excellence in the profession.’ ASHI does this through its chapters, website education and The ASHI School, and by providing InspectionWorld,® the premier annual conference for inspectors in the profession.

“ASHI inspectors abide by a Code of Ethics that rings loudly in the inspection profession.

“ASHI inspectors are trusted because we realize that we are not just inspecting a house; we are inspecting a home for a family. There is a difference, and let me explain. I did an inspection years ago that I will never forget. Most inspectors in their career will have one of these inspections that brings them into reality and reveals the importance of their inspection.

“I had arrived early at the home, as most inspectors do, to get a little ahead of the exterior inspection with no interruptions. As I rounded the house to the front, I saw a man on the sidewalk watching me. It was a curious moment and I approached him and asked if I could help him in any way. He informed me that he was the buyer. I was puzzled and asked how he got there and where was his car?

“He then explained that he had walked part way due to an illness that sometimes overcomes him and he can’t drive, and this happened on the way there. He then looked me in the eyes and said he was dying and would not be here within the next year and, in reality, I was inspecting this house for his family. He asked that I please do a thorough job so he would know that his family had a good safe home. I tell this story to exemplify the trust people have in us as inspectors—to use the skills we have developed through knowledge, experience and the morality to do a good job. 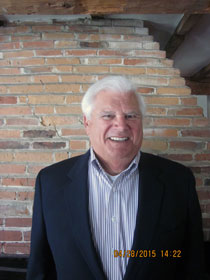 Since the inception of ASHI, Anthony (Tony) has been a member. After graduating from college, Tony was employed by a Boston consulting engineering firm that focused on civil and sanitary engineering for towns and municipalities. In the late 1960s, he was hired by the Town of Acton, MA, as its town engineer with the added responsibility of building inspector. It was during that time that Tony became aware of this as-yet unknown field called “home inspection,” and he encouraged an acquaintance who was a local builder to pursue this business.

After leaving the Town of Acton, Tony established his own business as a builder and land developer. During this time, he worked part-time for Area Home Inspection and became involved with ASHI’s New England Chapter. In 1980, Tony organized ASHI’s National Education Conference (as InspectionWorld® was called back then) in Boston. He served on the National Board of Directors and was elected National President of ASHI, serving a two-year term in 1986 and 1987. During his tenure, he attended and participated in chapter meetings throughout the country.

“When meeting with existing, as well as new, members, I was always impressed with their eagerness and desire to increase their knowledge and awareness of our profession. At that time, consumers were beginning to understand and appreciate the importance of a home inspection for their biggest investment, their homes. I found mentoring very rewarding. I am a strong proponent of ongoing education, which is critical in our field.”

In 1979, Tony purchased Area Home Inspection, which employed 15 home inspectors. In 1994, with a name change to Galeota Associates, Inc., the company became a family business for Tony, along with his two sons, Christopher and Greg.

Chris and Greg are enthusiastic about their home inspection careers, increasing awareness of the importance of home inspections, addressing misconceptions and educating consumers to keep them informed. Over the years, they have been featured in the media and have provided presentations. Tony’s wife, Dolores, who had been a sales operations manager for a large high-tech company, also is part of the family business.

Tony is a graduate of Boston College High School and holds a degree in architectural engineering from Wentworth Institute of Technology. In addition to his roles in ASHI, he has served as president of the Builders Association of Greater Boston and as national director of the National Association of Home Builders. In 1990, he received ASHI’s Philip C. Monahon Award.

“I began doing home inspections in the mid-1970s, after being inspired by my brother, Jules Falcone. Jules, one of the founders and charter members of ASHI, was ASHI’s first Membership Chair. He helped develop the standard of practice and served in many national and chapter posts. After ASHI was established, I joined in 1976 and became certified in 1978,” explained Wayne Falcone.

As ASHI celebrates its 40th anniversary, so, too, does Wayne and other family members who also chose home inspection as a career and who attribute their professional success to ASHI—its standards, resources and members—as well as to their involvement with ASHI at the chapter and national levels.

Wayne began his career by working for Jules in his home inspection company. Then, in 1983, Wayne launched Accurate Home and Building Inspections Services so he could have his own business. He became involved with the Mid-Atlantic Chapter and in 1984, when there were enough members to start the Tri-State Chapter, Wayne joined and served as Chapter President from 1986 to 1988.

Tri-State sent Wayne to ASHI’s National Educational Conferences (now known as InspectionWorld®) and he became involved on a national level: elected to the national board as a director, serving in board and committee positions including national Treasurer, national Membership Co-chair and ASHI President in 1992.

Wayne’s professional experience and credentials, as well as his interaction with clients, have led to more and more referrals. He said, “In fact, my business is totally based on referrals. The home inspection profession has evolved, and ongoing, new ASHI resources and education can keep us current. The whole reporting system has changed, and my interest in home inspection reports has resulted in referrals from clients (buyers and sellers) and real estate agents.”

For example, Wayne has developed a 75-page manual for homeowners. It includes sections on maintenance, energy tips, basement water penetration, checklists and other important information. H

An ASHI Member Remembers…
“One of my first memorable experiences in ASHI came at an ASHI convention in Chicago (I think it was in January 1986),” recalls Allen Blaker, ACI. “As a brand new inspector, I was in awe of everything and just like a kid in a candy store, I took in every moment as my three-day experience unfolded. The first day of seminars, I found myself in a large room of mostly candidates, probably about 400 people, listening to a panel of the ASHI elite discussing ethics. The moderator was ASHI’s very own founder, Ron Passaro and, as fate would have it, at the next year’s National Educational Seminar, I found myself, at break, standing right next to Ron in the bathroom. I started our conversation by thanking him for serving as the moderator of the ethics session the year before. His reply is one that I will never forget: ‘I can sum up how I feel about ethics with one phrase: If you have to ask the question, you are too close to the problem.’

“I have shared that phrase with every student I have taught over the last 30 years, and I will continue to use it until the day I die, making it a primary part of my personal and professional life, with the hope that all those students I touch also make it part of theirs.

“Thank you for letting me publicly thank Ron for that memorable moment and for the opportunity to share his words with everyone in ASHI. ASHI is truly special, and I am grateful for each day I can say I am affiliated with ASHI.

Send in your submission today!
Please submit your most important or lasting memories and experiences as an ASHI member to Frank Lesh (frankl@ashi.org) and look for these remembrances throughout 2016 in the ASHI Reporter.