ASHI members take pride in receiving the award created in the memory of the man who led the society in its early years as the executive director. Described as a visionary who maintained the organization's focus on valid standards, combined with strict conscientious business practices, Philip C. Monahon set the bar high for the leaders who have followed.

This year Frank Lesh was recognized for his dedication to serving and educating the members of the Great Lakes Chapter and his contributions to the national organization and the home inspection profession.

In 1994, as a member of the governance task force, he participated in the creation of the Council of Representatives and served on the council until he was elected to the Board of Directors, following that with terms as secretary, vice president, president-elect, president in 2007 and immediate-past president.

Recognizing consumers' concerns about EIFS, he was the first to graduate from the Exterior design Institute in the State of Illinois, has served as the Institute's Regional Governor (EDI) and State Governor (EDI) and has preformed hundreds of EIFS inspections.

In addition to recognizing an outstanding member every year, ASHI donates $500 to the Newton-Wellesley Hospital, Newton, Mass. in the name of deceased member Philip C. Monahon. 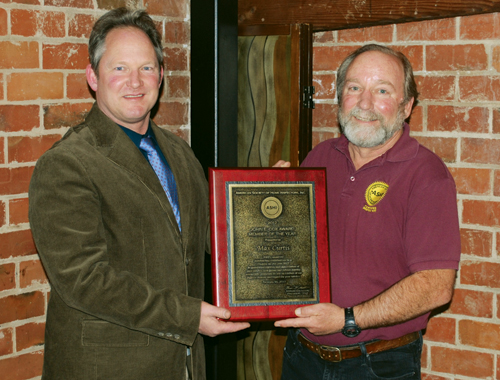 John Cox served on a national committee, taught weeklong seminars and routinely inspected homes, although numerous operations on his legs due to diabetes meant using crutches and a wheelchair to do so. Nevertheless, it was dedication and service to two ASHI chapters that earned the greatest respect from his peers.

Max Curtis too has served at the national level, but his value to the Golden Gate Chapter was summarized as "Max's exemplary integrity inspires the respect of home inspectors and the public at large. He leads by example."

That, accompanied by a long list of contributions to the Golden Gate Chapter, earned him the coveted John Cox Award for 2012. Highlights of his contributions follow: 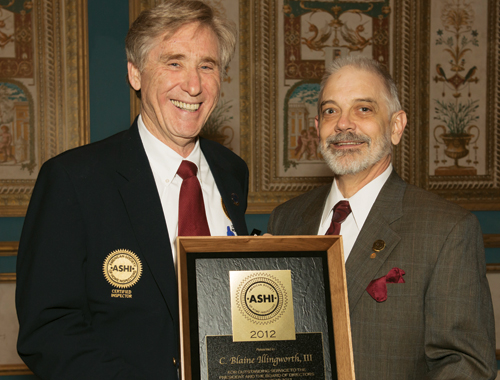 Marvin Goldstein, 2012 ASHI president, chose C. Blaine Illingworth as the recipient of the President's Award, which is given for outstanding service to the President and the Board of Directors for a specific year. As the alternate director, C. Blaine Illingworth stepped up to fill the big shoes when ASHI lost Don Nelson earlier in the year. In addition, he served as a media spokesman backup and took on special tasks at the request of the president.

Outgoing President Marvin Goldstein chose Tim Buell for the Ironman Award. Accepting special assignments and working behind the scenes using his accounting credentials, he was the perfect fit for an award described as follows:

Every organization has its unsung heroes who labor quietly in the background, but with great dedication. The Ironman Award, established in 1998 by John Palczuk, recognizes an individual member who has given time, energy, talent and determination to ASHI over a long period of time and with little recognition. Buell continues to serve as an ASHI Director.

An ASHI Member established this first-of-its-kind award because he attributes his personal success as a home inspector and the prosperity of his multi-inspector firm to the ideas and information acquired by regularly attending InspectionWorld.The basis for the awards are the total confirmed reservations for InspectionWorld for a chapter in each of two categories based on size preceding the date of InspectionWorld.

This year Southern Colorado and Western Washington each received an award of $750.

Chapters are recognized for the percent of growth and for the number of new members. In 2012, South Carolina ASHI grew by the greatest percent and Arizona ASHI had the greatest increase in numbers.