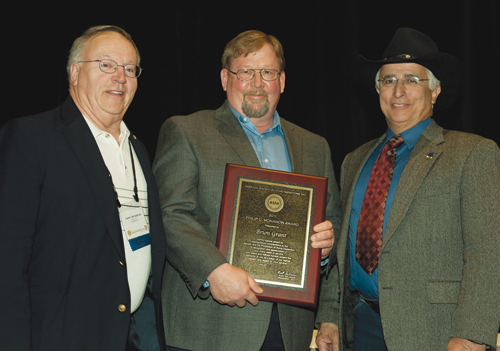 This most prestigious of ASHI’s awards was established in 1983 in memory of Philip Monahon, who was a larger-than-life individual and a true visionary for the future growth and success of the society. Serving as ASHI’s executive director in its early years, he maintained the organization’s focus on valid standards combined with strict conscientious business practices.

2011 Monahon Award Recipient: Brion Grant
Past-president Brion Grant was recognized for making exceptional and innovative contributions to the ASHI membership. Since joining ASHI in 1987, he has served with distinction and dedication on the Council of Representatives, the ASHI Board and numerous committees and task forces. While serving as its chair, the Legislative Committee developed The Position Statement on Regulation of Home Inspectors, which was used extensively as a guide by states enacting regulations. During his tenure as an ASHI officer, a new executive director was hired, the ASHI Foundation was created, the ASHI Certification program was instituted and the  non-profit corporation for education (AEI) was established.

The past winner of the ASHI Ironman Award hasn’t limited his contributions to the society. He participated in a home inspector coalition that helped develop home inspection-related regulationin Arizona, and then was appointed to the State Home Inspection Advisory Committee, which he chaired for four years.

An Awards Committee selects the recipient from nominees submitted by the membership. An annual cash donation of $500 is made to the Newton-Wellesley Hospital in Newton, Massachusetts, in the name of Philip C. Monahon. 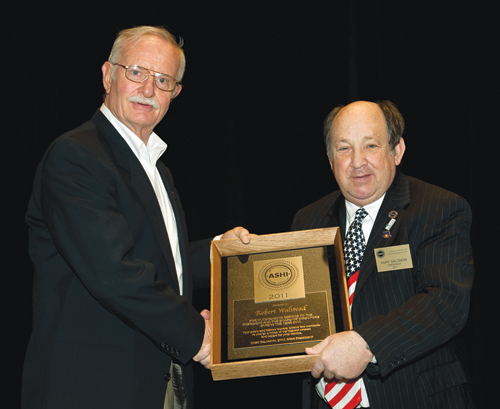 Photo above: Bob Walstead (l) was honored with the President’s Award from 2011 ASHI President Kurt Salomon.

Each year, the outgoing president recognizes one member for outstanding service to the president and Board of Directors during that year.


2011 President’s Award recipient: Robert Walstead
He served as the Speaker of the Council of Representatives in 2011. According to President Kurt Salomon, Jr., “His leadership skills include calmness, accomplishing tasks assigned by enlisting the efforts of others and honor. His vision is what is best for ASHI. When Robert was asked for support from the Council, he always responded and got things done.” 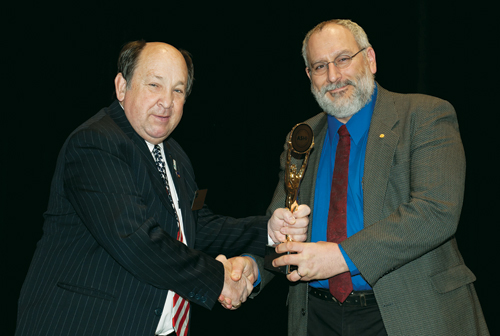 The award recognizes a member who has labored quietly in the background, with great dedication, giving of his or her time, energy, talent and determination to ASHI over a long period of time with little recognition.

2011 Ironman Award recipient: JIm Katen
President Salomon said he chose Katen because “he is knowledgeable about construction and building codes. In simple terms, he would be considered a master. Often, when there is question posted on the ASHI Forum, he responds with a code reference. Also, he is the chair of the Technical Review Committee for the third year. Jim is a true gentleman and an asset to ASHI.”

The John E. Cox Award honors individuals who have made exemplary contributions to their chapter, either over a period of years or under circumstances that are special and may not occur again.

Don Nelson joined Great Lakes Chapter in 1988. He served as an officer and was instrumental in the development of the chapter’s Peer Review Program, which is used for continuing education and training by his chapter and several others.

In addition, he assisted with the Mentoring Program and developed the chapter vendor program. Recognized as the first International Liveryman at the Worshipful Company of Constructors, Nelson received the Freeman of the City of London from the Lord Chamberlain.

2011 President Kurt Salomon said, “During the 2011 Leadership Training Conference, Don gave an excellent presentation on leadership skills. He has used his background in the Boy Scouts in his activities with ASHI. The Boy Scouts honored him with the prestigious Boy Scout Silver Beaver Award.”


— Tom Byrne Memorial Scholarship Award —
This award was created at the suggestion of ASHI Past-Presidents Alan Carson and John Palczuk in honor of Mr. Tom Byrne, who was a charter member of ASHI, ASHI president and ASHI’s longest-serving board member. He was a champion of education and a mentor and friend to many professional home inspectors. 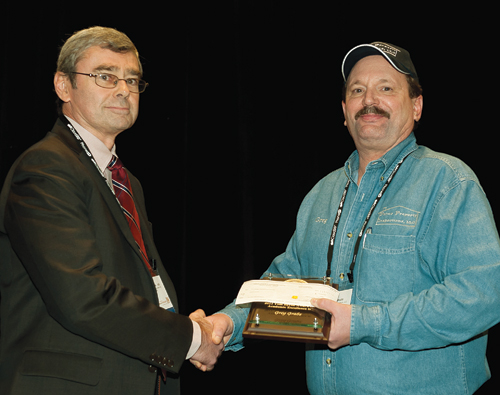 Alan Carson (l), president of Carson Dunlop, presented the 2011 Tom Byrne Memorial Award to Greg Grabs (r) at ASHI’s annual meeting in Phoenix, Arizona. The award, which includes a plaque and a $3,000 cash prize from Carson Dunlop, goes to the person who annually achieves the highest graduating mark in the ASHI@HOME home inspection education program. Grabs, of Bismarck, North Dakota, is an agricultural engineer who joined ASHI in September 2011. He achieved a remarkable overall grade of 95% on this rigorous 10-course postsecondary-level education program.

“It was a real honor to recognize the amazing history of ASHI, my friend Tommy Byrne and the remarkable educational achievement of Greg Grabs,” commented Alan Carson. “Greg clearly has both an aptitude and attitude that are ideally suited to the profession and I look forward to seeing great things from him and his company, Prime Property Inspections.”