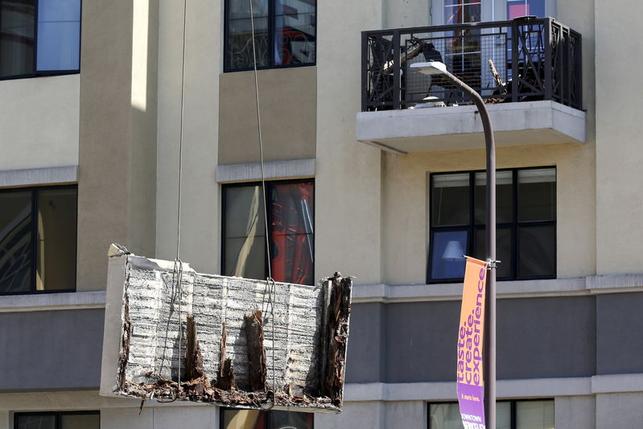 But the consensus among structural engineers interviewed by Reuters was that the fourth-floor balcony should otherwise have been sturdy enough, under normal circumstances, to safely bear the weight of the 13 people who were on the deck at the time.

All 13, mostly college students from Ireland working in the San Francisco Bay Area for the summer on temporary visas, plunged to the street below when the balcony gave way during a birthday celebration on Tuesday.

Splintered wooden support joists, which experts said were visibly decayed, were left protruding from the building's outer wall after the platform crashed onto a vacant third-floor balcony just below it.

Three men and three women in their early 20s, including an American friend of the Irish students, died in the collapse, and seven others were hospitalized.

Students and community members joined other mourners at a memorial mass for the victims on Wednesday evening in nearby Oakland.

"Today, all of Ireland embraces these young people and their families," said Father Aidan McAleenan, an Irish-born priest, in a homily before a few hundred people gathered 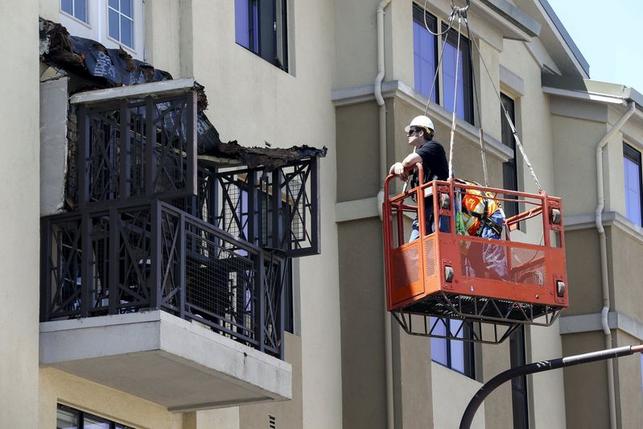 at the Cathedral of Christ the Light.

"The worst thing that can happen in life is to lose a child. What we can do now is to pray, to love, and to care for each other."

After the service, about 350 students lit candles and held a silent vigil in a Berkeley park near the site of the accident.

The integrity of the stucco-over-wood-frame construction at the Library Gardens apartment complex, near the University of California at Berkeley, immediately came under scrutiny as city inspectors began to examine the accident site.

Municipal officials declined to discuss the condition of the balcony's underlying structure or speculate on what caused the collapse.

But three Bay-area structural engineers and a building inspector from New York who examined pictures from the site all agreed that wood rot from moisture seeping into the balcony's support beams was a likely factor.

Alvin Ubell, founder and chief inspector of Accurate Building Inspectors in New York City, and other experts agreed that defects in the design, installation and maintenance of waterproofing, flashing materials and ventilation could leave untreated wood framing especially vulnerable to decay.

Otherwise, they said the use of wooden timbers to support cantilevered platforms in such construction was commonplace. 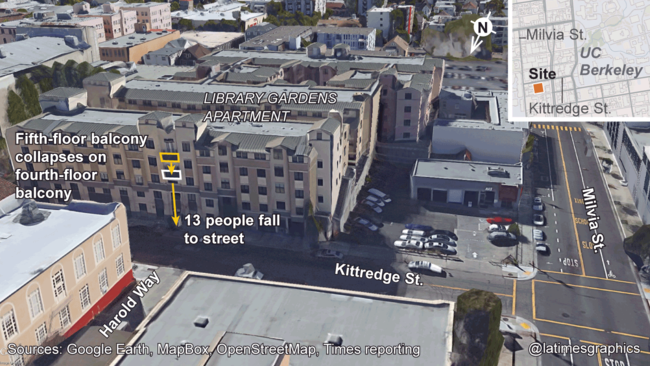 Structural failures accounted for about 5,600 injuries from balcony-related falls from 1990 to 2006, according to data collected by the Center for Injury Research and Policy in Columbus, Ohio, and published in 2009 by the American Journal of Emergency Medicine.

As for questions of weight, Derrick Hom, the Oakland-based president of the Structural Engineers Association of Northern California, said the crowd on the deck may have come close to the balcony's maximum design capacity but "probably was not the critical deciding factor."

Taryn Williams, a forensic engineering specialist in San Francisco, and Berkeley-based engineer Joshua Kardon, who visited the site, agreed, assuming the students were not doing anything to put undue strain on the deck, such as jumping up and down.

Hom and his fellow experts dismissed any suggestion the balcony, measuring only about 30 square feet, was designed more as an architectural flourish than as a functional balcony space.

They said any outside deck with a door, which the balcony had, would only be permitted if designed and built to full code.

The deck below the fallen balcony was also to be removed after being tested and found to be unsound after the accident, a spokeswoman for Berkeley Mayor Tom Bates said.

Homeowners should consider a professional deck inspection. “A professional inspector will thoroughly examine your deck, provide information on your deck’s capacity limits, identify any dangerous problem areas and give you some insight of what to keep your eye on in the future,” says Mike Beaudry, Executive Director of the North American Deck and Rail Association (NADRA). “NADRA provides industry professionals with a Deck Evaluation Form that is available HERE.

NADRA has created an Inspectors section on its website that will give consumers across North America direct access to professional inspectors who specialize in deck inspections. "ASHI inspectors now have the educational resources through this first-of-its-kind collaboration with ASHI to utilize the NADRA Deck Evaluation Form and truly make a difference in deck safety and deck safety awareness for cinsumers across North America," said Beaudry. ASHI members can become NADRA certified for evaluating decks, stairs and railings. Below is a list of ASHI members who are NADRA Deck Evaluation Certified:


Making Use of Technology in Home Inspections During Coronavirus