Split-bus electrical panels are different from other electrical panels because they don't have a single circuit breaker to shut off all of the power. These panels usually have several circuit breakers labeled "Main", and they're all mains. There can actually be up to six main breakers in these panels. Most of the split-bus panels I've inspected have space for up to six mains, but they're not always used, and some panels have less. 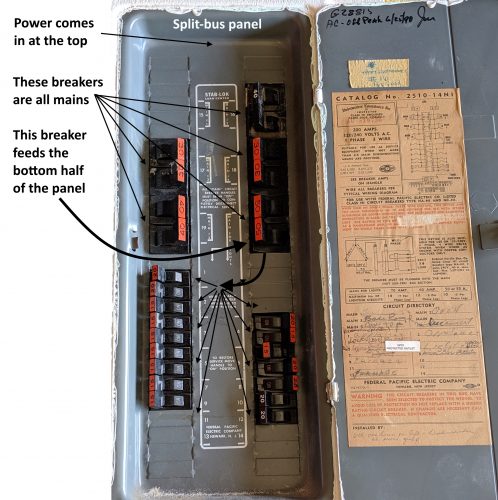 Here's that same panel with the cover removed, as well as all of the lower breakers. 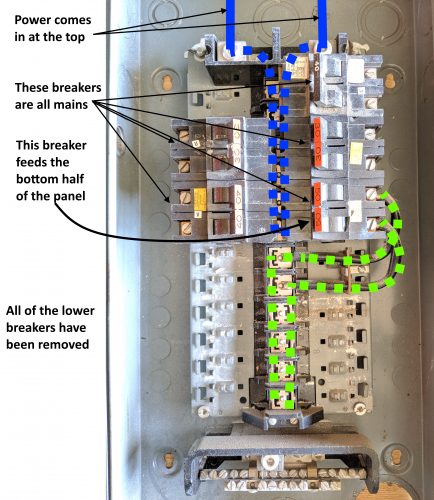 The circuit breaker at the bottom right supplies power to the bottom half of the panel, which contains all of the 120-volt  lighting and appliance circuits. Once you turn off that breaker, you've turned off most of the power to the house. But not all of it.

This diagram inside the panel illustrates the same thing. 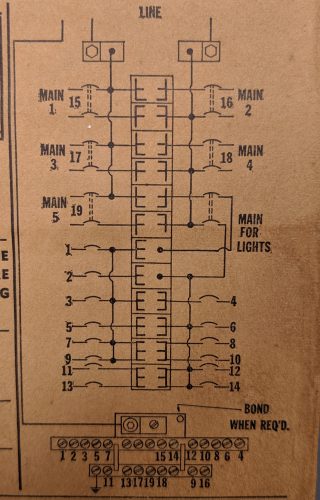 Sizing a service with a split-bus panel

The history of split bus panels

According to my favorite electrical book, Electrical Inspection of Existing Dwellings, split bus panels were allowed starting in 1965. The 'main' breakers were only supposed to be 240-volt two-pole breakers. You weren't supposed to have individual 120-volt circuit breakers supplying power to 15 and 20 amp lighting and appliance branch circuits... for the most part. There was an exception to that rule in 1978.

This means that if you see a single-pole circuit breaker used in the 'mains' section of a split bus panel, it's not necessarily wrong. As a home inspector, this certainly isn't something that would make my report, because I'd have a hard time explaining to my client how this could be unsafe.

Beginning in 1981, new installations of split bus panels were no longer allowed, but existing installations were allowed to remain in place.

There's nothing unsafe about a split-bus panel. It's easier to have a single circuit breaker to disconnect power, but this doesn't make existing installations unsafe. Said in my most soothing therapist's voice: "They just need to be understood."

How Much Does a Home Inspection Cost


What is a Contingent Offer When Buying a House